Pompeo doubles down on US support for Saudi Arabia, says no direct evidence of Saudi leader's involvement in journalist's murder 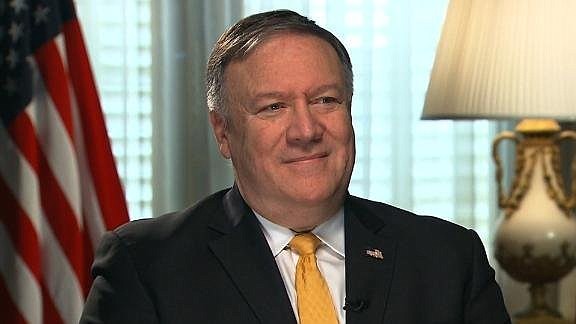 Secretary of State Mike Pompeo doubled down Saturday on the United States' support for Saudi Arabia and declined to comment on a CIA assessment that Saudi Crown Prince Mohammad bin Salman was involved in journalist Jamal Khashoggi's murder.

(CNN) -- Secretary of State Mike Pompeo doubled down Saturday on the United States' support for Saudi Arabia and declined to comment on a CIA assessment that Saudi Crown Prince Mohammad bin Salman was involved in journalist Jamal Khashoggi's murder.

In an exclusive interview with CNN's Wolf Blitzer on the sidelines of the G20 summit, Pompeo again noted a lack of direct evidence linking bin Salman to Khashoggi's murder.

"I have read every piece of intelligence that's in the possession of the United States government," Pompeo said. "And when it is done, when you complete that analysis, there's no direct evidence linking him to the murder of Jamal Khashoggi. That is a accurate statement, it is an important statement, and it is a statement that we are making publicly today."

When asked if the CIA has a high confidence of the de facto Saudi leader's involvement, Pompeo told CNN, "I can't comment on intelligence matters."

The secretary of state's comments come as a new report details some intercepts underpinning the CIA's assessment. The Wall Street Journal reports that the intelligence agency's assessment includes electronic communications the crown prince sent to a close adviser who oversaw the 15-man team that killed Khashoggi.

The crown prince sent 11 electronic messages to his communications chief, Saud al-Qahtani, in the hours before and after Khashoggi's death in October, the Journal reported, citing excerpts of the CIA's assessment it had reviewed.

The CIA's assessment says the content of the messages between bin Salman and Qahtani is unknown, and it does not specify the form in which the messages were sent, according to the Journal.

The assessment also says that bin Salman had told associates in August 2017 that if his attempts to persuade Khashoggi to return to his country were unsuccessful, "we could possibly lure him outside Saudi Arabia and make arrangements," noting that the communication "seems to foreshadow the Saudi operation launched against Khashoggi," according to the Journal.

The Journal said it is unclear from the excerpts whether the quote is directly from bin Salman or another individual describing his remarks.

Khashoggi, a Saudi royal insider before becoming an outspoken critic of the government, was killed in October by Saudi operatives during a visit to the Saudi consulate in Istanbul, Turkey, to obtain papers for his upcoming marriage.

The CIA said it has "medium-to-high confidence" that the crown prince "personally targeted" Khashoggi and "probably ordered his death," the Journal reported, citing the agency's assessment.

"To be clear, we lack direct reporting of the Crown Prince issuing a kill order," the assessment read, according to the Journal.

"We assess it is highly unlikely this team of operators ... carried out the operation without Muhammed bin Salman's authorization," the assessment said, according to the newspaper.

The CIA's assessment, which was first reported by The Washington Post, was compiled last month and concluded that bin Salman had personally ordered Khashoggi's death.