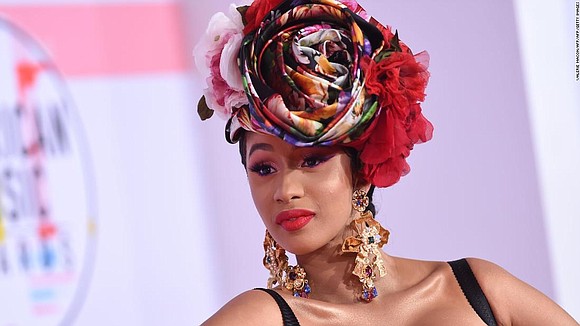 (CNN) -- Cardi B could face jail time if she doesn't show up to a court hearing on Friday.

The warning comes after the rapper, whose real name is Belcalis Marlenis Almánzar, failed to appear in arraignment court Monday for her alleged involvement in a fight at a Flushing, New York strip club in August.

A spokesperson for the Queens District Attorney's Office told CNN that "no formal motion" was made to issue a bench warrant for Cardi B's arrest, but a warrant could be issued if she does not show up to court later this week.

Cardi B's attorney, Jeff Kern, told the judge his client had a previously scheduled commitment on Monday, according to Variety.

The "Bodak Yellow" performer turned herself into New York Police in October and was charged with two misdemeanors counts of reckless endangerment and one misdemeanor count of assault.

Cardi B was allegedly "throwing chairs, bottles and hookahs [smoking pipes] in the club at 3 a.m.," according to a police spokesman. Two bartenders were also assaulted.

Related: Cardi B turns herself in to police, charged with endangerment and assault

Joe Tacopina, the attorney representing the two female bartenders, released a statement to CNN about the case in October.

"Cardi B ordered and committed violent assaults against my clients, and is being called to justice for her crimes. Apparently, she thinks her celebrity status puts her above the law, since she has bragged to multiple people and on social media that she orchestrated these vicious attacks," Tacopina said. "But reality is setting in, as justice does not care whether her name is Cardi B or Carly B, and she will now answer for her crimes."