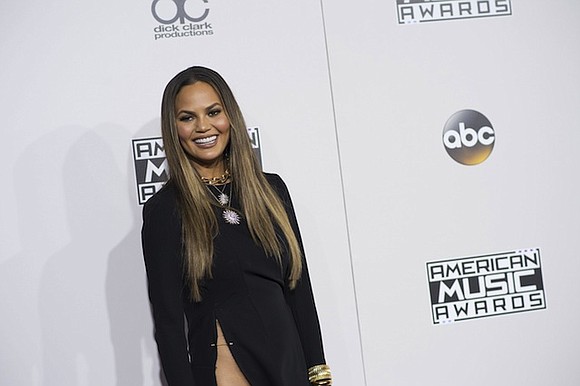 (CNN) -- American model Chrissy Teigen sparked a social media trend after sharing on Twitter and Instagram a photo of her son, Miles, with a corrective helmet to treat his flat head syndrome.

The 6-month-old was fitted for the helmet to fix his "adorable slightly misshapen head," Teigen posted.

Flat head syndrome, or plagiocephaly, is a common problem for babies -- one in every five is affected -- because they spend a lot of time sleeping on their backs, the UK's National Health Service says.

Doctors recommend that infants sleep on their backs to reduce the risk of sudden infant death syndrome, according to the American Academy of Pediatrics.

Babies born prematurely are more likely to develop it because their skulls are softer when they're born.

"In most cases they aren't a major cause for concern, as they don't have any effect on the brain and the head shape will often improve by itself over time," the NHS says, adding that a doctor should be consulted if parents are concerned about a baby head's shape.

The syndrome can be corrected with physical therapy and noninvasive measures, the pediatric academy says, and helmet therapy is rarely necessary.

Teigen later tweeted that Miles -- the younger of her two children with her husband, singer John Legend -- had been seeing a physical therapist and is doing muscle work in addition to the helmet.

Among those inspired to share her experiences was Kristin Nicole Guthrie, whose son, Colton, got a helmet when he was 5½ months old, after seeing a physical therapist.

"It was amazing. Within a week, we could already see a change. Every week and then every two weeks, they checked him and measured his head; at each appointment, we could see the difference," she told CNN.

Svitek told CNN that Jacob, who was born early and spent time in neonatal intensive care, soon developed a preference for turning his head to the right.

"We tried all sorts of ways of getting him to turn his head while sleeping, propping him up on his side to sleep, tummy time etc., but he'd always find a way to turn his head back, so he developed a pretty severe flat spot on the side of his head," she said.

"Our NICU follow-up team suggested the helmet, and it was the best decision for us. He took to it with no problems, and the results were amazing and fast. The helmet is very lightweight, and he wasn't bothered by it at all."

Ashley Jimenez, whose premature son, Archer, got a helmet at was 18 months, stressed that "it is rarely the parents' fault when the condition is severe enough to require the cranial band intervention."

"I saw a lot of comments from people who believe every flat head can be remedied by tummy time, and that's simply not true, especially for preemies and multiples," Ashley told CNN.