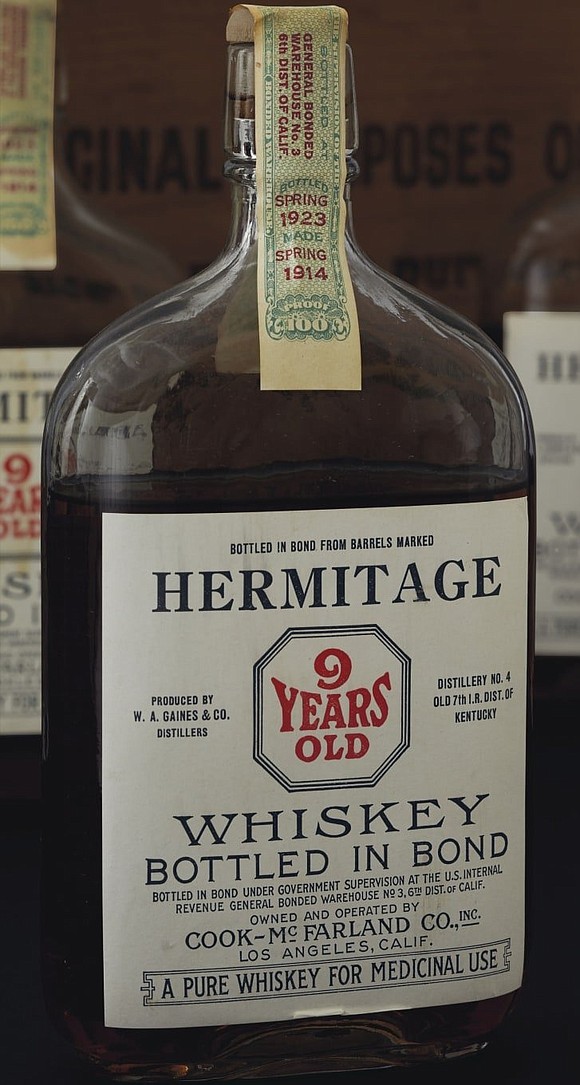 Christies will auction off 40 cases of unopened bonded whiskey bottled between 1908 and the 1930s, including a lot of Hermitage whiskey pints distilled around 1914.

(CNN) -- When Jean-Baptiste (J.B.) Leonis, the early 20th-century builder, banker, and wine and liquor merchant who founded the town of Vernon, California, spotted Prohibition on the horizon, he was not about to take any chances with his beloved whiskey.

At both his home in tony Hancock Park and his weekend retreat in Little Tujunga Canyon (where his neighbor was Cecil B. DeMille), Leonis commissioned the construction of secret vaults. Lurking behind trick bookcases and secured by heavy metal doors and combination locks -- the kind of high-test armor that Leonis, as a banker, was able to procure -- his stockpiled booze remained virtually untouched until the 2017 death of Leonis' grandson, Leonis C. Malburg, a one-time mayor of Vernon.

On Dec. 7, Christie's will auction off this long-forgotten stash: 40 cases of unopened bonded whiskey bottled between 1908 and the 1930s. In addition to Old Crow from 1912, the Leonis stock includes a lot of Hermitage whiskey pints distilled circa 1914 that Christie's expects to fetch between $7,000 and $9,000.

Pre-Prohibition whisky has become one of the hottest segment of a booming vintage-booze market. That's a relatively new development, considering that it was illegal for private citizens to auction off the alcohol that had been gathering dust in their family cellars until 2007. That's when the laws of New York state (where major auction houses, including Christie's, head up their US operations) changed to permit the secondary-market sale of liquor and wine for the first time since Prohibition.

The seeds of Prohibition were planted as early as the 1820s, with the birth of the temperance movement, a cause led largely by women who campaigned that alcohol was a destructive force in families and marriages. The turn of the 20th century saw a wave of evangelical Protestantism that bolstered temperance, vilifying the evils of "saloon culture."

In 1917, President Woodrow Wilson issued a temporary ban on booze to save grain for food production during WWI. Three years later, Congress made it official when the 18th Amendment came into effect. For almost 14 years years, that grand experiment banned the production, importation, transport, or sale of liquor for consumption. It also proved impossible to enforce, leading to the covert boozing that has now been thoroughly co-opted by Hollywood: Where would movies be without the advent of bootlegging, speakeasies, moonshine and the gangsters who profited from all three?

This sepia-tone lore is, or course, a large part of the appeal of pre-Prohibition liquor, a market that first demonstrated real potential in 2015. That year, Christie's auctioned off 10 cases of circa-1904 Old Overholt, the Pennsylvania rye said to be the drink of choice of gunslinger Doc Holliday. The house estimated the Overholt would go for $2,000 to $3,000 per case. Instead, one lot sold for $18,375.

"People came out of the woodwork for it," said Scott Torrence, senior wine specialist a Christie's, in a phone interview. Suddenly, the race was on.

Investing in a 100-year-old bottle of wine, Torrence says, is a game of chance. Unless its vintage and vineyard are particularly well-known, you can never be sure you're not spending hundreds of dollars on a bottle of rarified vinegar. But elderly whiskeys are comparatively consistent in flavor. Since whiskey ages in the barrel, as opposed to in the bottle, as long as the bottle's seal is intact, its contents should taste just as it did on the day it was bottled. And whiskey bidders, by the way, are not shopping for something to decorate their shelves: Torrence says most buy what they plan to sip.