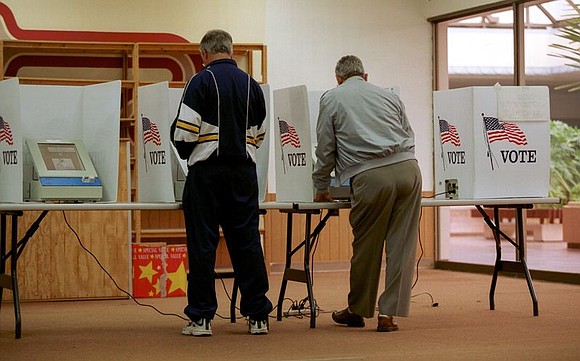 WASHINGTON, D.C. - Results from the 2018 Midterm NALEO Educational Fund/Latino Decisions Weekly Political Tracking Poll offer exclusive insights into the Latino electorate’s views on the 2020 presidential election. The poll was conducted by Latino Decisions from September 1 – November 4, 2018, in total 2,767 Latino registered voters were surveyed, which carries a margin of error of 4.4 percent. Over the course of the ten-week tracking poll, voters were asked about several political candidates, and how they plan to vote in the next presidential election.

The results show that the Democratic nominee will begin with a substantial advantage among Latino voters. Only 17 percent plan to vote for President Donald. J. Trump in 2020, and other Republican political figures have little traction with the Latino electorate. Democratic political figures are viewed more favorably, but many potential 2020 candidates are unfamiliar to large segments of the Latino electorate. If a Latino is on the 2020 Democratic ticket, the majority of Latino voters say they will be more likely to vote for the Democratic nominee in 2020.

“It is no coincidence that President Trump has consistently held low levels of support among Latino voters throughout his presidency,” stated Arturo Vargas, NALEO Educational Fund chief executive officer. “If he hopes to avoid this trend in Election 2020, he will need to reverse policy course and avoid using the kind of inflammatory language about Latinos and immigrants that has become all too common during his time in office.”

Vargas went on to say, “Democrats hold a large advantage among Latino voters heading into Election 2020, but they cannot afford to take our community for granted once again by failing to invest in a coast-to-coast strategy for mobilizing the nation’s second largest population group. Latinos made significant progress making our voices heard this past November, and it is time for the nation’s campaigns and candidates to help us build on that success by making consistent and sustained long-term investment of the Latino community a priority in 2020 and beyond.”

Specific mention of former HUD Secretary Julian Castro boosted support for the 2020 Democratic ticket among Latino voters. More than two-thirds (67 percent) of Latino voters said they would be more likely to vote Democratic if a Latino candidate such as Castro was on the ballot. Only 23 percent said having him on the ticket would not make a difference in their decision.

Many of the candidates weighing a potential run for President in 2020 still have a lot of work to do if they want the support of Latino voters in the next election. Of the 26 names mentioned to Latino voters in the survey, only five currently hold favorability ratings above 40 percent. These individuals include Michelle Obama (80 percent), Bernie Sanders (63 percent), Joe Biden (58 percent), Elizabeth Warren (43 percent) and Julian Castro (41 percent). Many of the other candidates still remain relatively unknown among Latino voters.

To view the methodology and full toplines for the 2020 presidential candidate polling, visit http://www.latinodecisions.com/index.php/download_file/832/.