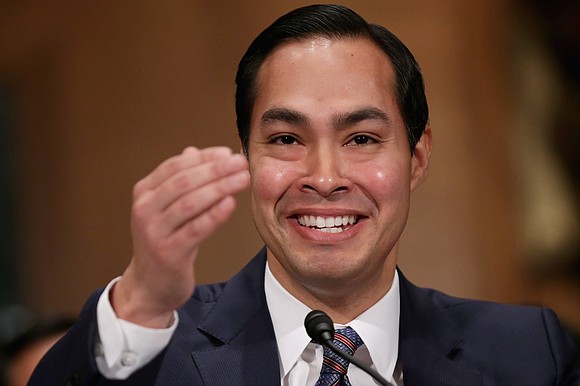 Castro said he would make an announcement about his plans on January 12 in Texas.

Castro's decision to form an exploratory committee, which is often seen as a formality before starting a presidential campaign and allows him to start raising money, gives him a jumpstart in what's expected to be a crowded Democratic field, which already consists of two declared candidates -- Rep. John Delaney of Maryland and Richard Ojeda, a former congressional candidate in West Virginia who lost his 2018 bid.

"As a kid growing up on the west side of San Antonio, I never thought that I'd one day be making this announcement," the former San Antonio mayor tweeted Wednesday. "I'm exploring a candidacy for President of the United States in 2020 to renew the promise of this country for all."

In a brief phone interview, Castro told CNN that he is "definitely leaning in one direction in terms of my candidacy for president," and felt now was the right time.

"I look forward to spending the next several weeks talking to folks around the country, raising money from supporters and getting things in place for January 12," he told CNN.

"I believe I can win the nomination," he added.

In the month ahead, Castro said he plans on traveling across the country to raise money as well as connect with voters in public appearances, though those plans are still taking shape.

Castro told Rolling Stone earlier this year that he is likely to launch a bid and has made early moves towards assembling a possible campaign. Last month, Castro and his twin brother Rep. Joaquin Castro held a meeting with possible donors to discuss the outlines of a potential presidential campaign. Since the midterm elections, he's engaged in conversations with prospective staffers, including operatives in Iowa.

Castro told CNN he has spoken with possible staffers for a presidential campaign but no hires have been made yet. He said his brother, Rep. Joaquin Castro, would play a prominent role in any operation, saying his twin has been his "most trusted adviser and harshest critic as well, and he's going to play a big role."

If Castro runs, he would likely be one of the only Latinos running for president in 2020. Asked if his Latino background will hold a certain resonance in this campaign cycle, Castro said, "I'm going to run to represent everybody and at the same time I know that especially right now when the Latino community has been under siege from this administration, that there's a particular meaning to my candidacy."

Should he decide to run, Castro could find himself pitted against another Texas Democrat considering a presidential bid -- Rep. Beto O'Rourke, who fell short in his Senate bid against Texas Sen. Ted Cruz last month.