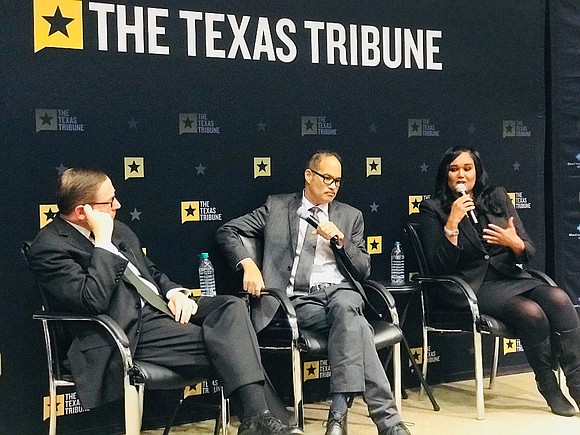 On Tuesday, January 23rd, State Representative Shawn Thierry sat down with CEO of the Texas Tribune, Evan Smith and State Representative Garnet Coleman to discuss solutions for a number of important issues, including: public education, sexual harassment and assault, and the upcoming Texas primaries.

On education, Reps. Thierry and Coleman agreed that the Texas Legislature has yet to do enough for public education. The system, itself, has got to be revised. Right now Representative Thierry represents students who barely have textbooks on their shelves. They both agreed that there has to be more funding guaranteed for our Texas students.

Representative Thierry discussed maternal mortality and the alarming rates at which black mothers are dying in the state of Texas. The state must do more than just collect data about this issue. Experts and officials must work together to take a course of action that will provide more mothers, and soon-to-be-mothers, with better healthcare. Right now, in real time, Texas mothers are dying.

As for the upcoming Texas primary elections, Rep. Thierry believes that the national political climate and discontent over the Trump administration will encourage younger voters to come out and vote. We hope that this year the House will gain more Democratic seats.

Additionally, the Representatives discussed the changing policies regarding sexual assault allegations at the Capitol. Rep. Thierry passionately stated that employees must have reasonable and safe avenues to report non-criminal accusations without retaliation of the accused. She reminded those listening that harassment and assault often vary in degrees, and the procedures at the Capitol need to accommodate for every possible situation. Beyond that, Representative Thierry advocated for the creation of separate House and Senate Committees to exclusively facilitate complaints, investigate, provide due process, and then create formal findings on the accusations of misconduct by Members of the Texas Legislature.

Click here to watch the footage from this event: