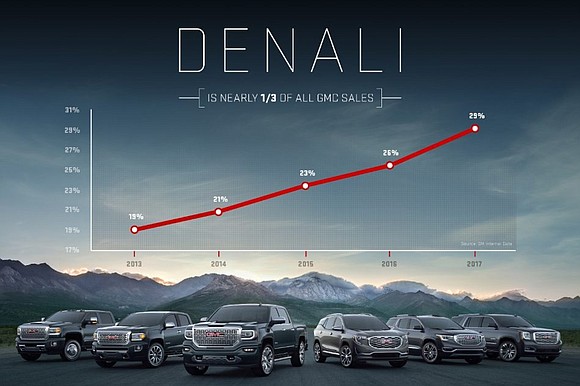 DETROIT — GMC closed out a solid year of sales performance with a 3 percent increase in total sales year over year for 2017 and 1 percent increase in retail sales year over year. Additionally, the average transaction price (ATP) for GMC trucks and SUVs has steadily increased 35 percent over the last 10 years, from $32,600 in 2007 to $43,800 at the end of 2017, which is the highest in GMC U.S. retail history. GMC ended 2017 with a 54-day supply of inventory.

“GMC had an outstanding year and continued to demonstrate its strong position in the broader GM portfolio,” said Duncan Aldred, vice president, Global Buick and GMC. “We introduced an all-new Terrain in a competitive and quickly growing segment, increased demand for the Denali sub-brand, and consistently delivered premium trucks and SUVs to our loyal and new customers whom we know seek top quality and excellent value for their money.”

In 2017, quality was a top reason for purchase, with exterior styling as the second highest reason for customers. The GMC portfolio is regularly honored with awards for quality and customer loyalty. Most recently, GMC received the J.D. Power 2017 Initial Quality Study – Best in Segment for Terrain and J.D. Power 2017 Vehicle Dependability Study – Top three in Segment for Terrain, Yukon and Sierra HD. Additionally, the Insurance Institute for Highway Safety honored the Acadia with the 2017 IIHS Top Safety Pick award when equipped with the optional Driver Alert Package II. Yukon Denali XL also received a Loyalty Award from IHS Automotive.

SUVs were the highlight of 2017 for GMC, starting with the NAIAS reveal of the all-new 2018 Terrain. GMC also saw the reveal of the enhanced 2018 Yukon Denali, featuring a new 10-speed transmission and interior design elements; the 2018 Yukon Denali Ultimate Black Edition; and the 2018 Acadia All Terrain with an available third-row option. GMC also celebrated selling its one millionth Denali since the premium-luxe trim launched with the GMC Yukon in 1999.