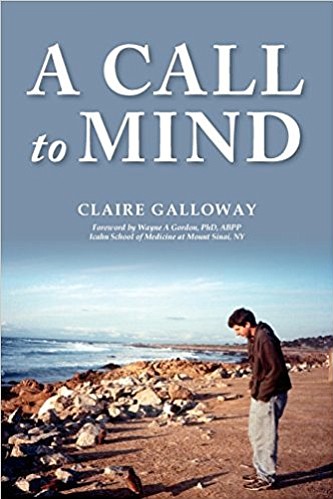 A Call to Mind: A Story of Undiagnosed Childhood Traumatic Brain Injury (Brandylane Publishers, 2017, ISBN: 978-1-939-93094-1, $16.95) is available at bookstores nationwide and from all major online booksellers.

No one ever gets over the death of a child. Yet in the wake of this terrible loss, Galloway has been determined to raise awareness for others about the scope and impact of unidentified TBI, especially closed-head injury. She wants physicians, educators, psychologists, family, friends, and, of course, parents to better recognize how a TBI can manifest so it can be identified and treated as soon as possible. She weaves through her son's story all manner of symptoms that, in retrospect, should have been recognized as brain injury soon after initial impact. Because medical and educational professionals can easily dismiss what cannot be seen, she hopes parents will learn through Luke's story what those TBI symptoms might be, and to stand their ground with doctors and teachers when their children change after a blow to the head.

She offers the following insights and advice for parents:

Take every bump on the head seriously. There may be no marks or immediate signs of a problem but that doesn't mean there isn't one. If your child loses consciousness, even briefly, or seems dazed and confused, vomits, or shows unequal dilation of the eyes, seek medical help right away. Also, be aware of any other unusual behavior—for instance, Luke didn't cry, which is not normal for a toddler—and don't try to explain it away.

"Teach your child to tell you every time she has a bump on the head," suggests Galloway. "This will alert you to be on the lookout for anything that seems 'off.'"

Make sure your child's doctor takes them seriously as well. Many physicians lack a precise protocol for diagnosing head injuries, so parents need to understand what the issues are, says Galloway. If you're seeing worrisome symptoms in your child and your pediatrician doesn't order appropriate testing and follow-up, you may need to seek emergency or urgent care to have your child assessed.

"The blow to the head, accompanied by changes in Luke's behavior, should have triggered advice to take him to the ER to determine the nature and extent of the injury," confirms Wayne A. Gordon, PhD, ABPP-CN, Jack Nash Professor and Vice Chair, Department of Rehabilitation Medicine, Icahn School of Medicine at Mount Sinai, who wrote the foreword to A Call to Mind.

"With all the news around head injuries in the NFL and military, there's a growing awareness of how serious a bump on the head can be," notes Galloway. "As a result, physicians are hopefully more open to parents starting the conversation around head injuries. My advice to parents is simply this: Don't give up until you are satisfied with the physician's response, and until that response matches your level of concern."

Be aware that many TBIs go undiagnosed. Many TBIs remain undiagnosed because physicians don't believe the parent's report of behavioral, emotional, or physical changes in their child. They might not believe what they can't see, or they might initially diagnose a concussion, but then dismiss a parent's observations of lasting changes, assuming the injury has healed.