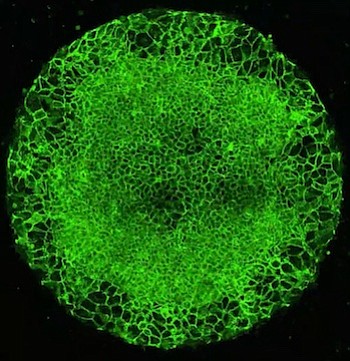 HOUSTON -- (Jan. 12, 2018) -- Rice University bioscientist Aryeh Warmflash has won a major National Institutes of Health grant to analyze a protein-signaling pathway that directs the differentiation of embryonic stem cells into the cells of the skin and the nervous system.

The work will build upon Warmflash's research into human embryonic development and the mechanisms by which nearly identical cells morph over time into the hundreds of types that become a mature organism.

The five-year R01 grant for more than $1.5 million from the National Institute of General Medical Sciences will fund the study of the Wnt signaling pathway that triggers reactions in cells through surface receptors. Various components of the pathway have a regulatory role in gene transcription as well as the cytoskeleton and calcium inside cells.

The Rice lab is interested in the pathway that sends signals to the stem cell's nucleus, where decisions on the cell's fate are made. Proteins known as signal transducers, which form links between the receptor outside the cell and the cell’s nucleus, are key.

Traditionally, researchers detect the transducer's state by grinding cells to see evidence of phosphorylation, a chemical process that activates or deactivates proteins. "That's one way to know that the cell is receiving this signal, but in the process you kill the cell and lose all the spatial and temporal information," Warmflash said.

"We're interested in understanding what individual cells are doing as a function of where they are and in time, so our alternative is to use CRISPR/Cas9 (a gene-editing tool) to attach a fluorescent protein to the signal transducer. Now we can watch the processes of the signal moving to the nucleus and of differentiation in living cells in real time."

In preliminary work for the grant, the lab developed a culture system in which embryonic stem cells are grown in colonies of a specific size and shape, and then upon differentiation they form self-organized patterns of different cell fates such as neurons and skin cells. Observing the Wnt signaling reporter as the cells are doing this allows them to connect the signaling pathway to the patterns that form.

"The Wnt pathway is incredibly fundamental to a lot of things, but people know almost nothing about its dynamics," he said. "These reporters will allow us to learn about that, and in individual, living cells."

He said individual cell fate decisions likely happen over the course of a day or two, so the lab is developing algorithms to track individual cells through images of their fluorescent signals as they morph within the system.

"If we could follow cells for six days, that would be fantastic, but we already work with very large volumes of data," Warmflash said. "We'll be really happy to follow them for two days as they're making these individual decisions."

Wnt pathways are also known to drive the growth of cancer, so understanding the dynamics could help design strategies to disrupt the disease, he said.