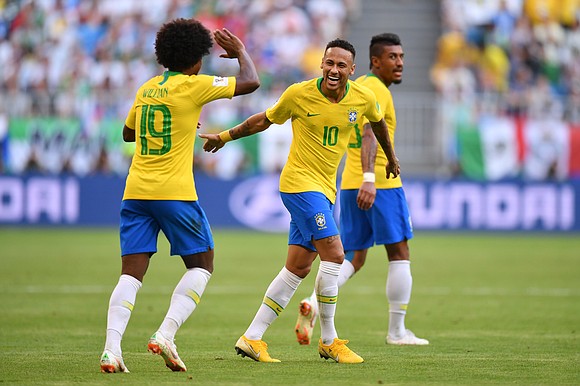 (CNN) -- In a World Cup which has had little respect for pedigree, Brazil made sure it did not become the latest heavyweight to fall with a 2-0 win over Mexico to reach the quarterfinals in Russia.

After being largely contained in the first half, a goal from Neymar after the break -- the 57th for his country -- and a late tap-in from substitute Roberto Firmino ended Mexico's participation in a tournament to which it has contributed much.

The result means that for the seventh successive tournament El Tri has been knocked out in the last 16.

Meanwhile Brazil, the favorites to win the competition, extended its unbeaten run to 15 games and will now prepare to face Belgium in the last eight.

No surprises in Samara

While history pointed to a Brazilian win -- Mexico lined up at the Samara Arena having never beaten the Brazilians at the World Cup -- this has been a tournament of surprises.

Reputation and past successes have counted for little, as Mexico coach Juan Carlos Osario pointed out during the pre-match build-up.

Spain, Argentina and Portugal have all followed reigning champions Germany through the trap door, with Mexico the first to wound the Germans with a mesmerizing 1-0 win in the group stages.

Achieving a victory over A Selecao would have stunned like no other in Russia so far. However, this proved to be a shock beyond El Tri.

The five-time champion was not for toppling, eventually beating its opponent with ease for the 25th time in 42 meetings.

Having been stifled early on in the contest, Neymar -- the world's most expensive player -- grew into the game and was more influential than he had been in the group stages, scoring his 11th goal in 19 internationals and assisting Firminho.

But while he impressed on the ball, his reaction to Miguel Layun stepping on his ankle when the Mexican went to retrieve the ball late in the second half did seem over top.

The Mexico full-back's studs appeared to make contact with Neymar, who was on the ground when the incident happened. But having wriggled around as if in agony after his brush with Layun, the Paris Saint-Germain forward got up without apparent discomfort once it was clear the Mexican would not be punished.

It was a reaction that would draw the ire of fans on social media.

While Neymar's influence on the match would eventually prove decisive, momentum was with Mexico in the early stages. El Tri's attacking trio of Javier Hernandez, Carlos Vela and Hirving Lozano were particularly testing for Tete's men down the flanks and forcing Brazil into retreat.

Opportunity arose for Hector Herrera in the 21st minute, but the defender took one touch too many when a first-time effort would have threatened.

From there on, Brazil switched into action.

Neymar provided a glimpse of his talents with a weaving run into the box, while Gabriel Jesus and Philippe Coutinho took aim, forcing Guillermo Ochoa into action in the Mexico goal.

Though it was a goalless first half, it was an intriguing contest and a breakthrough came soon after the break.

Moments after Mexico's Jesus Gallardo finished a marauding run with a wayward shot from distance, Brazil nabbed the opener when Neymar tapped in a low cross from the impressive Willian.

There was to be no rest for Ochoa as Brazil quickly threatened to cut loose. The Mexican goalkeeper saved from Paulinho and Willian, withstanding a flurry of attacks to keep his team in contention.

But as the match progressed Mexico tired in sweltering conditions and any hopes of an upset ended when Neymar created space down the left and put Firmino through for an easy goal.

It was a deserved victory for a Brazilian side which, for all its attacking might, kept a clean sheet for a ninth successive game.