Sweden marches on to quarterfinals after victory over Switzerland 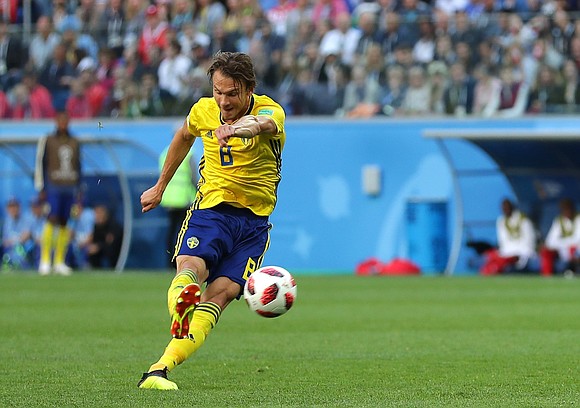 Sweden continues to defy expectations at the World Cup and broke a 24-year drought by beating Switzerland 1-0 to progress to the quarterfinals for the first time since 1994.

Sweden continues to defy expectations at the World Cup and broke a 24-year drought by beating Switzerland 1-0 to progress to the quarterfinals for the first time since 1994.

Having helped boot reigning champions Germany out of the competition in the group stage, the Swedes have now disposed of what was the highest-ranked team left in the bottom-half of the draw.

In a match where the level of finishing was poor, Emil Frosberg's deflected strike from distance in the second half proved to be the difference and set up a last-eight encounter with either England or Colombia on July 7.

Low in entertainment by the standards set in this tournament, the match concluded with high drama in injury time when the referee initially awarded a penalty and sent off Michael Lang for a foul on Martin Olsson, who was galloping through on goal with just the goalkeeper to beat.

But after reviewing on VAR, the referee overturned his decision and instead awarded a free-kick on the edge of the box, with Ola Toivonen forcing a diving save from Yann Sommer in the dying seconds.

Happy half century for Sweden

The Swiss would perhaps have expected to face Germany at this stage, but instead it was the Swedes who lined up in the St. Petersburg stadium as Group F winners with the reigning champions the first heavyweights to be knocked out of this wonderfully exciting tournament.

Sweden's coach Janne Andersson said he felt like crying after his team beat Mexico 3-0 to secure its place in the last 16. Emotions will no doubt be high again as Sweden, in its 50th World Cup match, achieved back-to-back victories for the first time since hosting the competition in 1958.

"We have a gameplan and they do not stray from it one millimeter," said Andersson of his team, a side making up for its lack of superstars -- notably Zlatan Ibrahimovic, who retired from international football after Euro 2016 -- with unity and spirit.

They stuck to their tactics again against a Swiss team ranked sixth in FIFA's rankings and, on paper at least, would have been favorites to progress.

Based on both teams' style of play, not many expected a spectacle and neither side defied expectations.

A largely uneventful first half sparked into life in the closing stages when both Sweden and Switzerland created opportunities to break the deadlock.

Blerim Dzemaili blazed over the crossbar in the 38th minute after a series of fine one-touch passes by his teammates around the box, while minutes later Albin Ekdal was equally profligate, shooting over the bar when a header would perhaps at least have hit the target.

Ekdal's miss was the chance of the half, but Sweden had also created opportunities early on -- Marcus Berg first went wide and wild and then forced Sommer into a fine save low to his right.

The second half was even less enthralling until, in the 66th minute, Frosberg's shot from the 'D' deflected off Manuel Akanji, leaving Sommer with little hope. Without the deflection, it would have been a comfortable save for the Swiss goalkeeper.

Switzerland came close to forcing the match into extra-time, but Robin Olsen dived low to his right to prevent Remo Freuler's header from sneaking in.

It proved to be Switzerland's last chance and its record of having failed to score a goal in the knockout stage of a World Cup since 1954 continued.