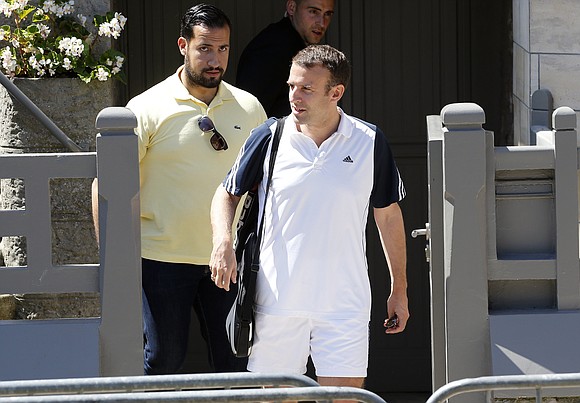 (CNN) -- French President Emmanuel Macron is facing a growing crisis as prosecutors confirmed they were investigating a senior aide who was filmed beating up a May Day protester while wearing police insignia.

Alexandre Benalla, a senior security adviser, was taken into police custody Friday after videos emerged that showed him violently confronting demonstrators, with other police officers close by.

The Paris prosecutor has opened a preliminary inquiry into a number of potential charges against him, including violence by a public official, pretending to be a police officer, illegally wearing police insignia and complicity in an attempt to obtain security camera footage.

Another bodyguard, Vincent Crase, who worked for Macron's En Marche! political movement, was also in custody, facing charges of violence by a public official and pretending to be a police officer.

Macron's chief of staff, Patrick Strzoda, was interviewed as a witness by investigators Friday, according to the Élysée.

"The presidency decided to start Alexandre Benalla's dismissal procedure after new facts that could constitute misdemeanor were brought to the president's attention," the Élysée Palace said in a statement Friday.

The crisis erupted when a French newspaper, Le Monde, identified Benella and Crase in a video taken at May Day protestors, where riot police were quelling demonstrations with tear gas.

The video shows Benalla lifting a protester off the ground by his neck and covering the man's mouth before striking him over the head with his fist. In another video, he can be seen dragging a young woman towards a wall and trying to force her to sit down, before returning to the young man. Police officers nearby do not appear to make any attempt to intervene.

Macron's office confirmed that dismissal proceedings were under way against Benalla on Friday after "new facts" came to light.

But the Élysée was facing questions over how a senior member of Macron's inner circle could have ended up posing as a police officer and beating up protesters, and why other officers did not stop him. The Élysée is also accused of failing to act quickly enough: Bernalla had already been suspended for 15 days before his dismissal was announced.

Three Paris police officers have been suspended on suspicion of unauthorized communication of surveillance footage to a third party, the French Ministry of Interior said in a statement Friday. The ministry declined to specify who the third party was.

Interior Minister Gérard Collomb "strongly condemns these actions which, if they are confirmed, constitute a serious breach of ethics and undermine the exemplary image which must, in all circumstances, characterize the action of the national police," the statement said.

Collomb is due to appear before a group of senators Tuesday evening to explain Benalla's involvement in the police operations on May 1, according to a statement from the Senate Law Commission Friday.