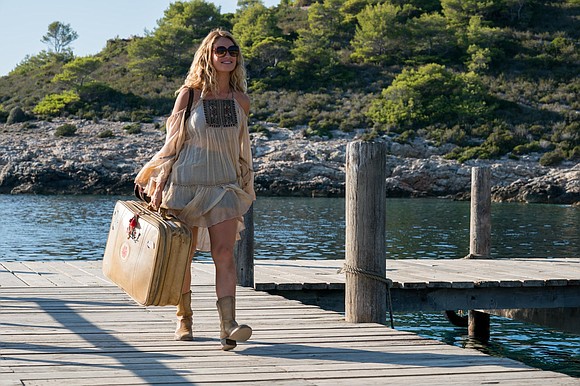 (CNN) -- At a moment where gloom feels pervasive in many quarters, "Mamma Mia! Here We Go Again" rides a tide of joy, fun and mother-daughter bonding, again set to a jaunty array of ABBA tunes. This decade-later sequel also features a pair of natural assets -- the dazzling beauty of its island setting, and the utterly winning presence of Lily James, who occupies what amounts to the central role as the younger version of Meryl Streep's character.

Slow to start, the movie feels a trifle clunky in the early going, and indulges in a bit of a gimmick toward the end, building toward a much-ballyhooed appearance by Cher, which feels like one of those token cameos by a big studio contract player back in the heyday of big musicals.

In between, though, "Mamma Mia!" hits plenty of the right notes, in large part by focusing the narrative on flashing back to 1979, when the young Donna first came to her Greek paradise (actually shot in Croatia), engaging in a trio of trysts with the men who would eventually end up being identified as the potential fathers of her daughter, Sophie (Amanda Seyfried).

Sophie is preparing to relaunch the family hotel, while having hit a rough patch with her husband Sky (Dominic Cooper). That narrative, fortunately, oscillates with her mom's story, which provides the opportunity to cast younger versions of all the key characters, and not incidentally, turn the singing chores over to people who are (with apologies to Pierce Brosnan, Stellan Skarsgard and Colin Firth, game as they are) a bit better suited to that particular task.

No one fares better than James, the "Downton Abbey" co-star who subsequently played "Cinderella." The slipper fits here, too, as James captures Donna's free spirit and vulnerability while belting out an assortment of songs, delivering an enormously appealing performance that helps carry the film past some of the rougher shoals that the story nears.

James provides a gust of fresh air in part because writer-director Ol Parker seeks to outdo the original (which featured a stronger roster of ABBA songs) both through the addition of new characters (including Cher, as well as Andy Garcia as the hotel's dreamy manager) and by simply throwing dozens of dancers at the musical numbers, which risks becoming wearisome.

Fortunately, the deeper aspect of the story -- how Donna found true love on that island, even if it wasn't immediately obvious to her -- taps into a genuine emotional well spring, heightened by an ebullient finish that should send audiences, again, humming the title track as they leave the theater.

The structure gives the established cast considerably less to do, but as noted, James' presence more than compensates for that. And as with the original, everyone looks to be having a grand time no matter how sizable the role is, which proves rather infectious.

Like its predecessor, "Mamma Mia! Here We Go Again" isn't a great movie, but it's a warm, occasionally stirring dip back into the jukebox and carefree escape into its pristine waters. If that's not quite the same experience as singing and dancing along the way people did on Broadway, for the price of a movie ticket, it's more than enough, yes, to make it worth going again.