Starbucks' Howard Schultz: 'Big difference' between my qualifications and Trump's 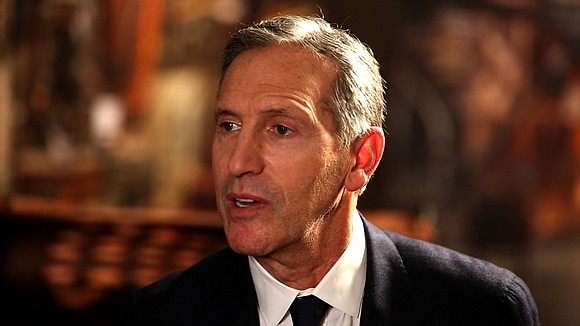 Outgoing Starbucks Executive Chairman Howard Schultz won't say for sure whether he's going to run for president. But he implied he's more qualified for the job than the business executive who currently holds the title.

(CNN Money) -- Outgoing Starbucks Executive Chairman Howard Schultz won't say for sure whether he's going to run for president. But he implied he's more qualified for the job than the business executive who currently holds the title.

"There is very big difference between someone who has run a global enterprise like myself, who has traveled to China probably more than any other CEO in the last 10 years, and who understands those issues, versus someone who has run a private company with very little fiduciary responsibilities to other shareholders," he said in an interview Tuesday on CNBC.

Schultz was very critical of President Donald Trump and the state of American politics and government, citing "vitriolic behavior coming from this administration." He added that while "President Trump has given license to the fact that someone who is not a politician could potentially run for the presidency," he stopped short of confirming that he is going to run himself. "I can't be nailed down today on what I might or might not run for."

He did say that he wants to be involved in public service to help bring the country together, and to fix the budgetary process in Washington.

"My concern (is) for the country. I think we can do much better. I think the political class as a whole has been reckless," he said.

Schultz also dismissed a comment by presidential historian Douglas Brinkley that previous CEOs have fared poorly as president. "The history of business leaders in the White House has not been good. ... You basically have Herbert Hoover and Donald Trump," Brinkley told The New York Times.

"I think the rules of engagement for running the United States of America in a global society are very different from comparing (them) to Hoover or the current president," Schultz told CNBC.

"Corporate America did not need a 21% tax cut when we could have done so much more for the people of the country, when 45% of the people in America don't have $400 in the bank for a crisis," he said.

He was also took Democrats to task.

"It concerns me that so many voices within the Democratic party are going so far to the left," Schultz said, citing proposals for a single-payer health care system and guaranteed income. "I ask myself how are we going to pay for these things."

He said the federal government's $21 trillion in debt is the greatest threat facing the country, and added that he wants to change entitlement programs to reign in government spending.