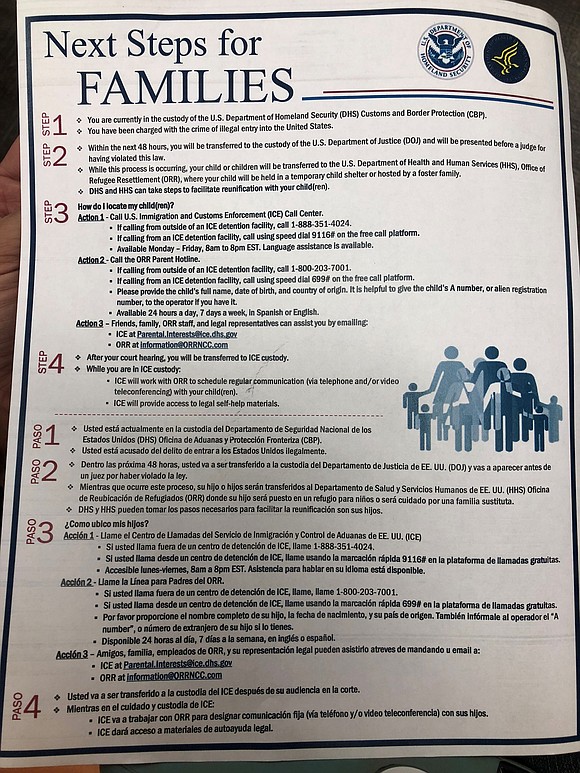 This is a document given to immigrants who are arrested and separated from their children at the US-Mexico border.

That question, included in a document given to immigrants who are arrested and separated from their children at the US-Mexico border, is at the heart of the Trump administration's new policy toward immigrant families.

Customs and Border Protection provided the document to CNN during a walk-through of a border processing center in McAllen, Texas, near the US-Mexico border.

The handout, titled "Next Steps for Families," explains in both English and Spanish the four steps ahead for detained immigrants with children. The form references a handful of bureaucratic acronyms and provides three main "actions" for helping the parents locate their child or children after they are separated.

The Trump administration has been pursuing a zero-tolerance policy toward illegal border crossings, in which every immigrant arrested for crossing the border is referred for federal prosecution.

The policy has had the effect of separating the arrested immigrants from their children. Department of Homeland Security officials said that at least 2,000 children have been separated from their parents since it began implementing the policy in late April.

The border processing center is the first place that detained immigrants go after they are arrested, but the stay is only temporary, CBP officials said.

Those arrested are then transferred to Department of Justice custody and presented before a judge for the crime of illegal entry into the United States. As part of that process, the immigrant's child or children will be transferred to the US Department of Health and Human Services, Office of Refugee Resettlement, the document states.

The handout recommends that parents call ICE, call the ORR Parent Hotline, or email the two organizations to locate their children.