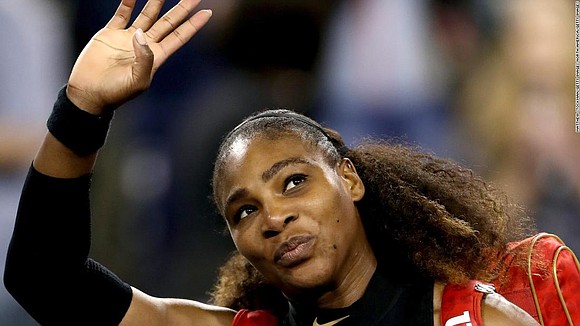 (CNN) -- Making her tennis comeback after becoming a mom for the first time, Serena Williams beat Zarina Diyas in straight sets in the first round in Indian Wells.

Williams overcame Diyas 7-5 6-3 in the California desert on Thursday in her first competitive singles match since winning the 2017 Australian Open 14 months ago.

Her thoughts then quickly turned to daughter Alexis.

"It's been over a year and a kid later," Williams told the crowd. "I get to go home now to her so I'm excited about that. Thank you guys so much for supporting me."

Williams improved to 3-0 against the 53rd-ranked Diyas. Her big serve wasn't broken in the first set but Diyas did break twice in the second, although Williams claimed the final three games of the night contest to set up a duel against 29th seed Kiki Bertens in a repeat of the 2016 French Open semifinals.

"It definitely wasn't easy," said Williams. "I've played her several times before and we always have a couple of tight sets. But it was good. I'm a little rusty.

"But it doesn't matter. I'm just out here on this journey doing the best I can."

It has been quite the journey. The American claimed her record 23rd grand slam title in Melbourne in the early stages of pregnancy and didn't play again for the rest of 2017.

She gave birth in early September by emergency C-section and revealed to CNN that she almost died in the days thereafter, being diagnosed with another pulmonary embolism -- Williams had the same condition in 2011 -- that triggered complications.

Her eventful year didn't stop there. Williams subsequently got married in New Orleans in November to Reddit co-founder Alexis Ohanian -- who was in Williams' player box Thursday -- before stepping back on court in late December for an exhibition in Abu Dhabi against French Open champion Jelena Ostapenko.

The 36-year-old contested her first competitive match of the year last month, combining with big sister Venus in doubles in team competition the Fed Cup against the Netherlands.

As her comeback in Indian Wells approached, Ohanian designed four billboards that were put up in Palm Springs, close to Indian Wells.

Williams -- who now doesn't have a ranking because of her inactivity -- could meet Venus in the third round in Indian Wells. Venus was another spectator on center court Thursday.

Serena's match against Kazakhstan's Diyas marked the first time since 1999 that she didn't have a first-round bye in Indian Wells or Miami, the pair of tournaments known as the sunshine double. They are considered the two biggest combined events outside the majors.

Williams said on the eve of Indian Wells that she wasn't lacking in motivation, despite winning the most grand slams -- women or men -- in the Open Era.

"I've always been an extremely motivated person, but my main thing is that I would love for my daughter to be around with me doing great and playing amazing, so that definitely gives me some motivation," she told the BBC.

"I would have thought I would have retired six years ago, but I'm still here and I'm playing great, and I think I'll still be playing good."

She called Indian Wells a good time to start her comeback, thinking ahead to the three remaining grand slams in 2018.

Reaching 24 majors would draw Williams level with Margaret Court for the most grand slam titles ever won.

"Serena's target (for this year) will be to win grand slams," her coach, Patrick Mouratoglou, told the WTA's official website. "She knows that coming back might take some time but her level of expectation is high as always.

"There are three grand slams left this season. They will be her three main goals for 2018."