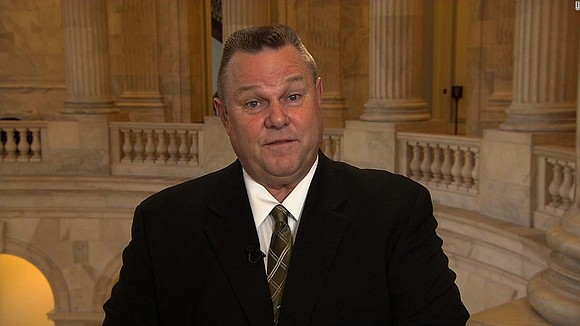 (CNN) -- Jon Tester is one of five Senate Democrats running for re-election in states that President Donald Trump carried by double digits in 2016 -- a fact on full display in the Montana Democrat's first television ad of the 2018 cycle.

In the video released Monday, Tester highlights 13 pieces of legislation he helped get signed into law by the Republican President.

"Washington is a mess, but that's not stopping me from getting bills to help Montana signed into law by President Trump," Tester says in the spot.

The ad features Tester and Montana residents counting off the number of measures signed into law, but ends at eight, with Tester saying: "I'm out of fingers, but I'm not finished getting things done for Montana." It's a nod to a childhood accident with a meat grinder that resulted in the loss of three fingers.

"Jon Tester's first campaign ad is so disingenuous it should be insulting to Montanans who voted for President Trump," said Katie Martin, the organization's communications director.

Tester is seeking a third term in the Senate with a crowded Republican field angling for the chance to take him on this November. The list of potential GOP opponents includes state auditor Matt Rosendale, former state Rep. Russell Fagg and businessman Troy Downing.

Trump carried Montana by 20 points in 2016, but Tester has shown an ability to win tough races in the past. He won re-election in 2012 by almost four percentage points while Barack Obama lost Big Sky Country to Mitt Romney by 13 points.