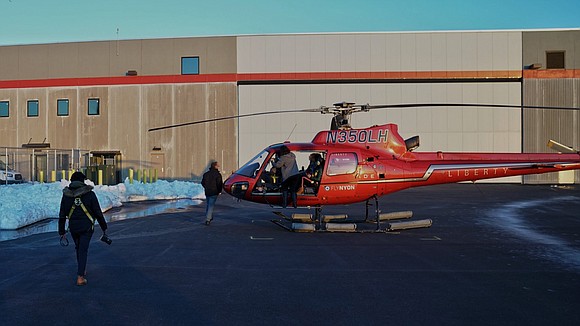 When emergency workers dove into the frigid waters of New York's East River to reach a downed helicopter on Sunday evening, they found a disturbing scene.

(CNN) -- When emergency workers dove into the frigid waters of New York's East River to reach a downed helicopter on Sunday evening, they found a disturbing scene.

The harnesses meant to keep the passengers safe on the doors-off helicopter flight had turned into death traps.

"One of the most difficult parts of the operation, we're told, is the five people besides the pilot were all tightly harnessed," Fire Department of New York Commissioner Daniel Nigro said.

"So these harnesses had to be cut and removed in order to get these folks off of this helicopter, which was upside-down at the time and completely submerged."

On Tuesday, the Federal Aviation Administration said it is giving "urgent attention" to the use of harnesses specifically for aerial photography flights.

"We are supporting the (National Transportation Safety Board) and we will take appropriation action based on what we learn from the investigation," the FAA said. "As a matter of overall safety awareness, we are preparing further communications and educational outreach to aerial photography operators and consumers on the use of these harnesses."

NTSB investigators are scrutinizing the harnesses as they work to determine how a helicopter ride for a private photo shoot turned into a fatal crash.

The helicopter, with the doors removed so passengers could take unobscured photographs, experienced engine problems and crashed in the East River. Its pontoons did inflate but then it flipped upside down and sank into the water.

The pilot was able to remove himself from the harness and escape, but all five passengers died from accidental drowning, the New York City Office of Chief Medical Examiner said. The New York Police Department identified the victims as Carla Vallejos Blanco, 29; Daniel Thompson, 34; Tristan Hill, 29; Trevor Cadigan, 26; and Brian McDaniel, 26.

Escaping the harness takes practice and expertise, according to Judith Verweijen, who works in the oil and gas industry offshore and flew on a FlyNYON helicopter on Saturday in New York.

"In my opinion, it is nearly impossible for a non-trained passenger to escape," she told CNN.

Helicopter crash attorney Gary C. Robb said he has electronically filed a civil lawsuit against the helicopter company and pilot on behalf of Cadigan's parents.

"The family is simply shocked and outraged that their son drowned to death in this manner," Robb said. "Their greatest wish is that this would never happen again, and that is their primary motivation for going forward."

Robb filed the lawsuit in New York County civil court Tuesday. It states Cadigan was killed "as a direct and proximate result of the aforesaid negligence and carelessness."

CNN has reached out to the companies named in the lawsuit.

The National Transportation Safety Board said it recovered electronic devices, including a GoPro camera, which is being sent to its lab in Washington.

Difficulty of removing the harness

The helicopter was owned by Liberty Helicopters. The passengers bought tickets for the flight through FlyNYON, which advertised its harnesses and doors-off helicopter rides earlier in the day Sunday.