Why Kim Jong Un made a secret trip to China 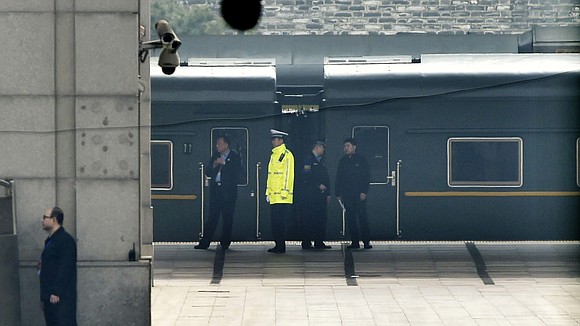 A surprise visit by North Korean leader Kim Jong Un to China may indicate Pyongyang's need for support from its closest ally ahead of upcoming summits with South Korea and the US./Kyodo News via APA

(CNN) -- A surprise visit by North Korean leader Kim Jong Un to China may indicate Pyongyang's need for support from its closest ally ahead of upcoming summits with South Korea and the US.

Kim met with Chinese President Xi Jinping and other high ranking officials in Beijing this week. Observers had said it would have been highly unusual for him to meet US President Donald Trump without seeing Xi first.

Prior to the Beijing trip, Kim had never met a foreign leader since he took power in 2011. China is North Korea's number one trading and economic partner, and is Pyongyang's only major military ally.

Kim and South Korean President Moon Jae-in are due to meet next month, and a proposed meeting with Trump is due to take place by May. Aidan Foster-Carter, an honorary senior research fellow at Leeds University, said it would have been almost unthinkable for Kim to meet with Moon and Trump having never met Xi, given the importance of the Sino-Korean alliance.

Since North and South Korea reopened diplomatic ties in February, Pyongyang has been pushing for a Korean solution to the ongoing crisis on the peninsula, which analysts say is a way of driving a wedge between Seoul and Washington.

The two countries have been allies since the Korean War, when Mao Zedong sent troops to support Kim's grandfather Kim Il Sung, and still maintain a mutual defense treaty, under which they pledge to "immediately render military and other assistance by all means at its disposal" in the event of war or foreign attack.

Since Kim Jong Un took power in 2011 however, the relationship has become increasingly strained. Kim purged several key officials with close ties to Beijing, including his uncle, Jang Song Thaek.

He also angered China by pursuing missile and nuclear testing against Beijing's stated goal of a denuclearized Korean Peninsula.

"The North Korean Chinese relationship has not been very good in recent years, particularly over China's acceptance of international sanctions and degree of implementing thecm," said James Hoare, an associate fellow at Chatham House and former UK diplomat in North Korea. "These will be subjects the North Koreans are keen to talk about."

Foster-Carter agreed, adding Pyongyang may be hoping China will ease up on sanctions following the summits with South Korea and the US.

Tong Zhao, a North Korea expert at the Carnegie Tsinghua Center for Global Policy in Beijing, said Pyongyang "wants to have some insurance against this upcoming summit meeting with President Trump."

"They know the meeting is very important but also very risky, there are a lot of uncertainties," he said. "If the meeting fails the US could declare that diplomacy has failed and shift to a more coercive approach or even a military strike."

"A stable and positive relationship with China would prevent the US from launching a military strike," Zhao said.