What makes ice cream so addictive? 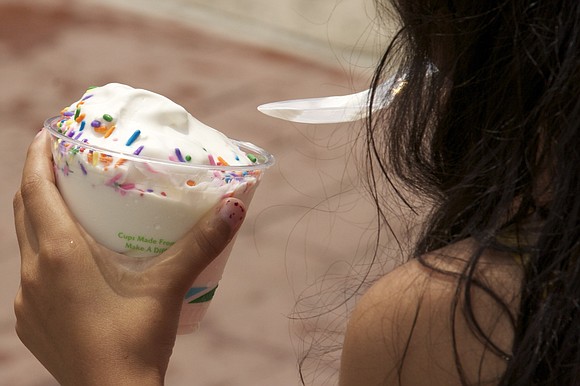 The No. 1 driver of ice cream cravings is sweetness, but it shouldn't be too sweet

(CNN) -- Ahhh ... just thinking about why ice cream is so "addictive" brings with it cravings for the sweet frozen treat. Even as a nutritionist concerned with healthy eating, ice cream is one food I can't give up.

Maybe it has something to do with the way the coldness hits my mouth on a hot summer day. Or the creaminess of every bite. Or the chunky chocolatey chips.

Or maybe it's that the thought of ice cream evokes happy memories of special times shared with my family in Sag Harbor, New York, where enjoying ice cream after dinner while walking along a pier lined with boats is a weekly ritual.

Whatever the reason, I know I'm not the only person that has regular cravings for ice cream. According to the International Dairy Foods Association, the average American consumes more than 23 pounds of ice cream per year. That's more calories than we'll ever want to know.

It even shares one key resemblance to other addictions. According to one recent study, the more often we eat ice cream, the more of it we may need to satisfy the craving.

"When you get the answer to that, will you call me and let me know?" joked Steve Young, a consulting food chemist and microbiologist, and a former technical director at Dreyer's and Edy's Grand Ice Cream, who teaches courses on ice cream science and technology to the very people who make ice cream, including at Breyer's and Ben and Jerry's.

According to Young, helping ice cream manufacturers produce ice cream with a high appeal for consumers "is the study of a lifetime." That's because it involves "a lot of applied chemistry and physics," he explained, along with "heavy doses of personal preferences." For example, Young notes, "I love coffee ... but if you put it in ice cream format, I can't stand it."

As the co-author of "Tharp & Young on Ice Cream: An Encyclopedic Guide to Ice Cream Science and Technology," he knows a bit more about what goes into making decadent ice cream than he let on. Unsatisfied with Young's non-answer, I pushed until he finally offered me at least a hint at what makes ice cream so delectable.

The ultimate appeal of ice cream, he explained, is anything that positively influences what he calls the "F-factor," or "flavor." And he breaks that down into the perception of any ice cream flavor as a complex combination of six variables: