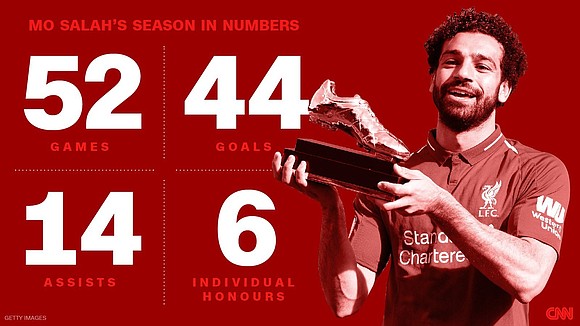 Mo Salah could yet write one final crowning chapter in what has been a phenomenal season for Liverpool's Egyptian international.

(CNN) -- Mo Salah could yet write one final crowning chapter in what has been a phenomenal season for Liverpool's Egyptian international.

His goal against Brighton on Sunday, the first in Liverpool's 4-0 victory which secured Champions League football for next season, saw Salah take his Premier League tally to 32, breaking Alan Shearer's record for a 38-game season.

Though one thing to elude Salah this season -- so far -- is a major trophy.

With 44 goals and 14 assists in 52 games for club and country, Salah has placed himself among the world's elite forwards.

But despite his goalscoring exploits, Liverpool still finished 25 points behind Premier League winners Manchester City, crashed out of the FA Cup fourth round to relegated West Brom and lost to Leicester City in the League Cup third round.

The team's fate for collective success now rests on the Champions League final, where they will face reigning 12-time Champions Real Madrid on May 26 in Kiev.

If Real have an unquantifiable amount of streetwise-ness in the competition, Liverpool can boast the most prolific attacking trio in Champions League history.

Sadio Mane's goal in the semifinal second leg against Roma took his, Salah's and Roberto Firmino's tally to 29 goals, surpassing the previous record of 28 set by Cristiano Ronaldo, Gareth Bale and Karim Benzema in 2013/14.

With just 90 minutes and the formidable foe of a Ronaldo-led Real Madrid standing between Salah and the Champions League, the "Egyptian King" would now surely swap all his individual accolades for a shot at immortality in the red of Liverpool.