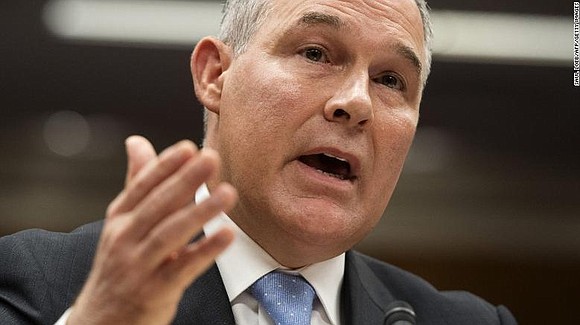 In his opening remarks, Pruitt said there were some decisions during his tenure he would not have made again with the benefit of hindsight, but he also denied some of the allegations against him and said some were exaggeration.

"So I share your concerns about some of these decisions. I want to rectify those going forward," Pruitt said. "I also want to highlight for you that some of the criticism is unfounded and I think is exaggerated and I think it feeds this division that we've seen around very important issues affecting the environment."

While the hearing was billed to be about the agency's budget, lawmakers were primarily focused on the fact that Pruitt's decisions at the head of EPA are the subject of a dozen investigations, reviews and audits from a variety of oversight bodies, including the inspector general, Government Accountability Office and Congress.

Among the new development's at Wednesday's hearing is Pruitt contradicting an internal email from his security chief that showed he encouraged the use of lights and sirens for non-emergency situations while traveling in a motorcade. The subcommittee's top Democrat, Sen. Tom Udall of New Mexico, raised the issue of a former special agent who worked on Pruitt's protection team who claimed he was demoted when he refused to drive with lights and sirens blaring through the streets of Washington.

Pruitt replied that the "policies were followed to the best of my knowledge by each of the agents that serve me."

When Udall pressed him again, Pruitt said he does not recall and that policies were followed by his agents "in all instances."

The Democrat senator followed up for a third time: "You personally requested that on a number of trips?" he asked Pruitt.

"No, I don't recall that happening," Pruitt said.

Udall then pointed to an internal email from Pruitt's former security chief that contradicts Pruitt's testimony.

In a February 2017 email released Wednesday by Democratic Sens. Tom Carper and Sheldon Whitehouse, EPA security chief Pasquale "Nino" Perro told others at the agency that Pruitt "encourages the use" of lights and sirens. Perrotta has since resigned.

When grilled about specific incidents -- including an official agency tweet in April mocking Democrats voting against the confirmation of an EPA official -- Pruitt repeatedly refused to apologize.

"The agency should not have done that," he said repeatedly, when asked if he should apologize by Udall.

At the beginning of the hearing, Republican Sen. Lisa Murkowski of Alaska, who chairs the Senate subcommittee, told Pruitt she was concerned that "many of the important policy efforts that you are engaged in are being overshadowed because of a series of issues related to you and your management of the agency."

"Instead of being asked about the work that you're doing ... I'm being asked, really constantly asked, to comment on security, on housing and on travel," she said.