Israel responds to Gaza fire with dozens of airstrikes 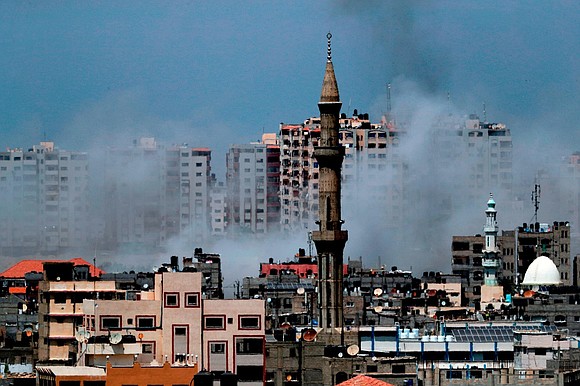 Israel has carried out dozens of airstrikes on targets in Gaza in response to what it called the biggest barrage of rocket and mortar fire from the strip since the 2014 war there.

(CNN) -- Israel has carried out dozens of airstrikes on targets in Gaza in response to what it called the biggest barrage of rocket and mortar fire from the strip since the 2014 war there.

The Israeli Defense Forces (IDF) said it launched more than 30 airstrikes targeting the militant groups Hamas and Islamic Jihad, after more than 28 rockets and mortars were fired towards Israeli territory Tuesday morning.

Israeli media reported that one of the mortars landed in the yard of a kindergarten, which was empty at the time because school had not started.

IDF spokesman Lt. Col. Jonathan Conricus said Israel was retaliating against a "massive" attack by militants in the Gaza Strip.

"We are not looking to escalate the situation. We're responding to the attacks in Gaza. And the responsibility and the control is in Hamas' hands," he said, referring to the militant group that controls Gaza.

Israel and the United States considers Hamas a terrorist organization.

Hamas spokesman Fawzi Barhoom defended the mortar fire, saying it came "within the framework of the natural right to defend our people." He said Israel would be responsible for any further escalation.

The UN's chief Middle East envoy Nickolay Mladenov expressed his deep concern at what he called "indiscriminate firing" by Gaza militants towards communities in southern Israel.

"Such attacks are unacceptable and undermine the serious efforts by the international community to improve the situation in Gaza. All parties must exercise restraint, avoid escalation and prevent incidents that jeopardize the lives of Palestinians and Israelis," Mladenov said in a statement.

Tuesday's confrontations came after weeks of Palestinian protests, known as the Great March of Return, near the fence that separates Gaza and Israel, during which more than 100 protesters were killed by Israeli fire.

The protests were intended to highlight Palestinian demands to return to homes and villages they lost during the creation of the state of Israel seven decades ago, and were given a boost by the opening of the US embassy in Jerusalem on May 14. Israel said the protests were orchestrated by Hamas and presented a security threat to people living nearby.