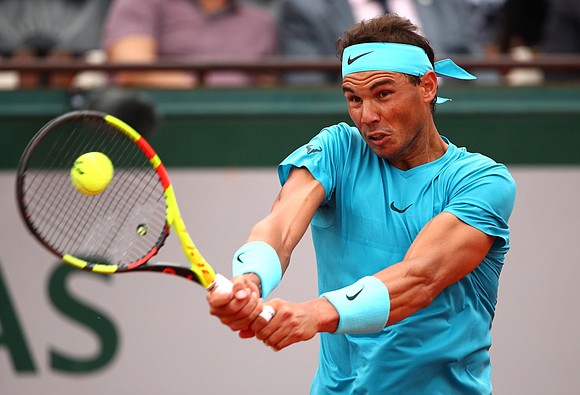 Rafael Nadal suffered one of his sternest opening tests at Roland Garros.

Nadal, however, suffered one of his sternest opening tests at the tournament he has won a record 10 times and was forced to save four set points in a thrilling third-set tiebreak against Simone Bolelli.

Williams, who gave birth in September, hadn't featured at a major since winning the 2017 Australian Open while in the early stages of pregnancy.

Her return to tennis came earlier this year but she entered the French Open on a two-match losing streak and with no clay matches under her belt.

As a result of her inactivity on the tour, the American's ranking has slumped to 451st.

Nonetheless her coach Patrick Mouratoglou -- never one to set the bar low -- thinks that the 36-year-old can still land a fourth French Open title despite the dearth of matches and a tough draw.

If she succeeds, Williams would tie Margaret Court for the all-time record in majors with 24.

Despite some rust, Williams served brilliantly against Pliskova -- the twin sister of 2016 US Open finalist Karolina Pliskova -- and reversed a 3-0 deficit in the tiebreak. Mouratoglou and husband Alexis Ohanian cheered her on from the stands on Philippe-Chatrier court.

Williams recovered from a break deficit in the second set and saved three break chances in the final game.

Deprived of a wildcard last year in the aftermath of a drug suspension, Sharapova earned a seeding this year but had to overturn a late deficit to defeat Dutch qualifier Richel Hogenkamp 6-1 4-6 6-3 on Court Suzanne Lenglen.

The two-time champion was breezing to victory at a set and 3-1 up, before her level dipped and Hogenkamp's elevated. Sharapova trailed 3-0 in the third and had to fend off two break points at 2-3 against the world No. 133.

Nadal was pushed by Italian lucky-loser Bolelli in the completion of their opener suspended by rain Monday but advanced 6-4 6-3 7-6 (11-9).

At nearly three hours, it was Nadal's second-longest first-round match at the French Open, behind his four-hour dual against John Isner in 2011.

The French Open is the lone grand slam without a roof and that isn't expected to change until 2020.

Garbine Muguruza shook off a rain delay to beat Svetlana Kuznetsova 7-6 (7-0) 6-2 in a clash of past French Open winners.