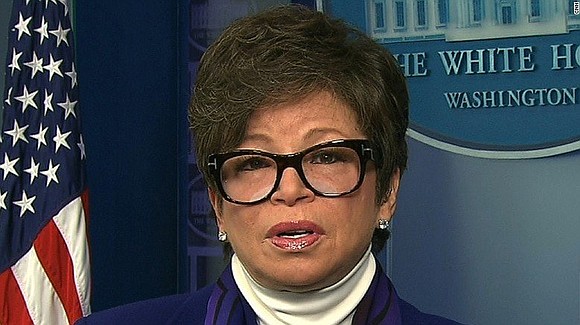 (CNN) -- Valerie Jarrett, a former top aide to President Barack Obama, reacted to actress Roseanne Barr's racist Twitter rant that led to the cancellation of the television sitcom "Roseanne" on Tuesday by saying that the incident should become "a teaching moment."

In one tweet, Barr wrote, "Muslim brotherhood & planet of the apes had a baby=vj" in reference to Jarrett. ABC announced it was canceling "Roseanne" in the aftermath of the Twitter outburst.

Jarrett said on MSNBC she is "fine" but feels concerned for people without "friends and followers who come right to their defense" who experience "ordinary examples of racism that happen every single day."

"I think we have to turn it into a teaching moment," Jarrett said. "I'm fine. I'm worried about all the people out there who don't have a circle of friends and followers who come right to their defense. The person who is walking down the street minding their own business and they see somebody cling to their purse, or run across the street, or every black parent I know who has a boy who has to sit down and have a conversation -- the talk -- as we call it. As you say, those ordinary examples of racism that happen every single day."

Barr, who has since apologized to Jarrett on Twitter, is facing intense backlash for her comments.

In a statement announcing the cancellation of her sitcom, ABC Entertainment president Channing Dungey said, "Roseanne's Twitter statement is abhorrent, repugnant and inconsistent with our values."