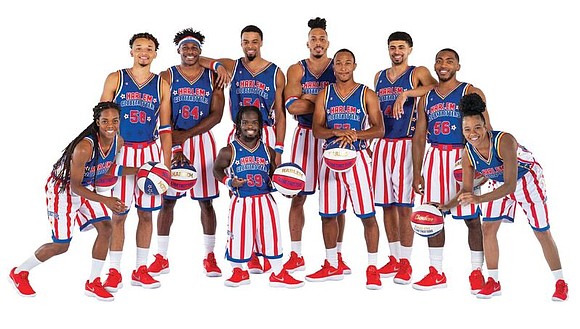 (ATLANTA, Nov. 6, 2018) ­–The world-famous Harlem Globetrotters, who are preparing to enter their 93rd season of entertaining fans around the world, today unveiled their 10-player rookie class for the 2019 Fan Powered World Tour, which is now underway and will travel to more than 250 markets throughout North America.

Dunbar and Thompson, who were both selected in the Globetrotters annual draft this past June, are joined by eight other exciting young players who are joining the exclusive legacy of Globetrotters, who have played before millions of fans in 123 countries around the world since their inception in 1926. Those players are:

“These 10 players are going to be outstanding Harlem Globetrotters,” said Sweet Lou Dunbar, who is now the team’s director of player personnel and head coach. “I’m personally thrilled that my son, Sweet Lou II, is among this group, but he and all of these players earned their way onto the roster. We’re confident that they will be great Globetrotters—great players who also know how to entertain and put smiles on the faces of every one of our fans throughout the world.”

Sweet Lou II Dunbar joins the Globetrotters following a career at Oklahoma City University, where he earned All-Sooner Athletic Conference honors his senior season. As a junior, he native racked up nine games with 22-or-more points, including a 50-point outing against the University of Science and Arts of Oklahoma (USAO) where Dunbar shot 11-of-14 from three-point range. The Houston native, who played at Clear Falls High School in Seabrook, shot better than 40-percent from three-point range in each of his four college seasons.

Lili “Champ” Thompson had a standout college career at both Notre Dame, where she won a national championship, and Stanford, whom she helped lead to the Final Four in 2014. As a Cardinal, she earned All-Pac-12, Pac-12 All Defensive Honorable Mention, Pac-12 All-Academic Honorable Mention, and became a two-time ESPN National Player of the Week. The daughter of two parents who served in the U.S. Army, Thompson was raised in Honolulu and is fluent in sign language. She earned her undergraduate degree at Stanford and her Master’s at Notre Dame.

Thompson is one of two top female players joining the roster this year, along with 5-8 guard standout Brittany “Ice” Hrynko. Hrynko, who was born and raised in Philadelphia, played professionally in Israel, Italy, Germany and Slovakia where she led the Slovakian Golden Angels to a league championship in 2016. Before going overseas she was selected in the second round (19th overall) of the 2015 WNBA Draft, going on to play for the San Antonio Stars and the Tulsa Shock, after earning Big East Player of the Year and Big East Scholar-Athlete of the Year as a senior at DePaul.