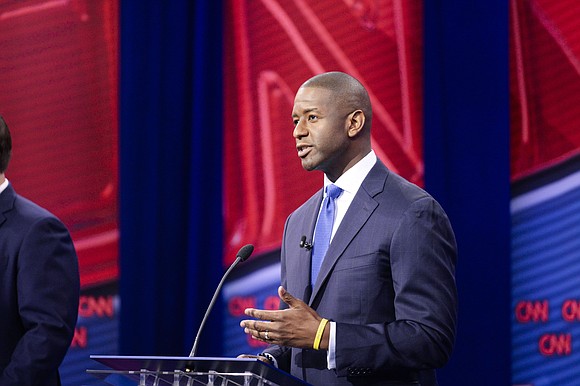 A white supremacist group in Idaho is behind another racist robocall targeting Andrew Gillum, the Democratic nominee in the Florida governor's race.

All 435 House races are on the ballot, with Democrats feeling optimistic about winning control of the chamber.

In the Senate, 35 seats are at stake, with Republicans positioned to hold -- and possibly expand -- the party's slim majority.

And 36 gubernatorial contests will be decided, with Democrats looking to put a dent in the current 17-seat advantage for Republicans.

That doesn't count the 6,066 state legislative races across 46 states and 158 ballot measures in 37 states.

With so much at stake, we here at CNN have identified 10 races that help explain the story of the 2018 midterms -- and might offer hints about how things are likely to shake out on Election Night.

This Lexington-area district will be one of the first places we see votes on Election Night and could offer an early clue at just how energized Democrats are this year. Democrat Amy McGrath, a retired Marine fighter pilot, has given GOP Rep. Andy Barr a run for his money in a district President Donald Trump carried by 16 points. If Democrats are winning in places like eastern Kentucky, then Republicans could be in for a long night on Tuesday.

Two-term Rep. Dave Brat stunned the political world in 2014 when he defeated House Majority Leader Eric Cantor in a GOP primary. Four years later, Brat could find himself on the losing end of another upset, facing a strong challenge from Abigail Spanberger, a former CIA operations officer. She is not running as a progressive firebrand, but just as Brat rode the Tea Party wave against Cantor, Spanberger could capitalize on the suburban backlash to the President in a traditionally Republican district.

Can a moderate Republican survive in a swing district where disapproval with the President is creating significant headwinds? That is the question confronting several GOP incumbents, including New Jersey Rep. Leonard Lance. The five-term incumbent broke with his party and voted against the Republican tax bill and the GOP's 2017 effort to repeal and replace the Affordable Care Act. Despite those moves, Lance might not be able to escape the shadow cast by Trump and the GOP agenda. He faces a well-funded challenge from Democrat Tom Malinowski, a former State Department official, in a district Hillary Clinton carried by a single point.

There are seven GOP-held seats in California that Hillary Clinton carried in 2016. They include the 45th District which is based entirely in Orange County and is a longtime Republican stronghold that's become increasingly diverse. Mitt Romney won the district by 12 points, but it went for Clinton by five. GOP Rep. Mimi Walters is running against Democrat Katie Porter, a consumer protection lawyer and Elizabeth Warren protégée. A victory here by Porter, a progressive favorite who has endorsed single-payer health care, would send a signal of how far the politics of this area have moved.