US issues sanctions on 17 Saudis over Khashoggi murder 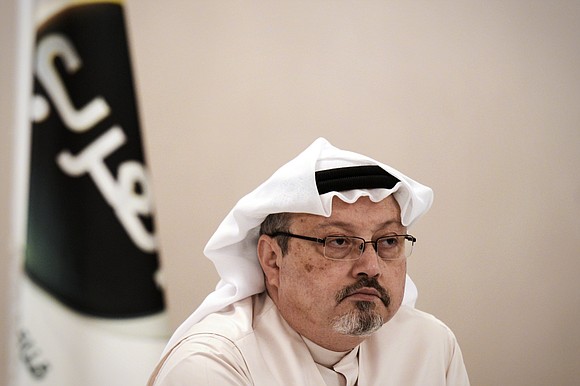 (CNN) -- The Trump administration on Thursday imposed penalties on 17 individuals over their alleged roles in the killing of dissident journalist Jamal Khashoggi.

The fresh sanctions from the Treasury Department come hours after Saudi prosecutors said they would seek the death penalty for five people charged in the death of the Virginia resident, who was a contributor to The Washington Post.

"The Saudi officials we are sanctioning were involved in the abhorrent killing of Jamal Khashoggi," said Treasury Secretary Steven Mnuchin in a statement. "These individuals who targeted and brutally killed a journalist who resided and worked in the United States must face consequences for their actions."

Secretary of State Mike Pompeo issued a statement saying that "the State Department will continue to seek all relevant facts, consult Congress, and work with other nations to hold accountable those involved in the killing of Jamal Khashoggi."

The killing, which was recorded, created a crisis for the Trump administration. Saudi Arabia's explanations for Khashoggi's disappearance shifted constantly, from initial assertions that he was still alive to the possibility rogue actors were to blame, even as it became clear responsibility for his death reached the highest offices in the Kingdom and could implicate the de facto ruler, Crown Prince Mohammad bin Salman.

Neither the Saudi prosecutor's release nor the Treasury statement on sanctions mentioned bin Salman, but Pompeo acknowledged that at the time of Khashoggi's killing, the individuals sanctioned by Treasury on Thursday "occupied positions in the Royal Court and several ministries and offices of the Government of Saudi Arabia."

The Trump administration has made the Kingdom central to its hopes for a Middle East peace between Israelis and Palestinians as well as its efforts to contain Iran and to keep oil prices steady as it moves to sanction Tehran. President Donald Trump has veered from proposing "severe punishment" to suggesting "rogue" elements were behind the killing.

The killing has also drawn attention to Trump's business ties to Saudi Arabia and the relationship between the crown prince and Trump's son-in-law and senior adviser Jared Kushner. As outrage grew on Capitol Hill and overseas, Trump and Pompeo have stressed the need for patience, for the Saudis to complete their own investigation and the importance of US ties with the kingdom.

Allen Keiswetter, a scholar with the Middle East Institute who served in the region with the State Department, said that if any serious steps are taken against Saudi Arabia, it will likely happen on Capitol Hill.

"The major action, I think, is going to be in the new Congress where Congressional approval of Saudi arms sales will be a major issue," Keiswetter told CNN. "Particularly in the House, with the Democrats in control. The other major impact is the worldwide reaction to all of this, which means that Saudi Arabia has suffered a strong blow to its reputation."

Khashoggi, a former Saudi royal insider who became a critic of the country's government, disappeared on October 2 after he went into the Saudi Arabian consulate in Istanbul, Turkey, to obtain paperwork to marry his Turkish fiancée.

Mnuchin said the US government would work "diligently" to obtain all the facts on the death of Khashoggi and hold "accountable" any individual found responsible.

"The Government of Saudi Arabia must take appropriate steps to end any targeting of political dissidents or journalists," he said.

Mnuchin had previously told reporters it would be "premature" to discuss whether the US would impose sanctions on the Saudi government.

Earlier on Thursday, the Saudi Public Prosecutor's office said a total of 11 people were charged, adding that the five people facing capital punishment were directly involved in "ordering and executing the crime."

The prosecution also shared details of the journalist's murder, saying Khashoggi was killed following "a fight and a quarrel" at the Saudi consulate.

Khashoggi was then "forcibly restrained and injected with a large amount of a drug resulting in an overdose that led to his death," the prosecutor said.

The body was then dismembered and removed from consulate by five people. One person was responsible for giving it to a local collaborator. One person shut down internal CCTV cameras, the prosecutor said.

The head of the mission and the head of the negotiating team decided together to write a "false report" to the intelligence deputy chief saying Khashoggi left the building after the failed negotiations.

Overall, 21 people were arrested and six officials were removed from their positions, according to the prosecutor and the Saudi foreign minister. Of the 11 charged, the prosecutor is seeking the death penalty for five of them.

Hours after the Saudi prosecutors made their announcement, Khashoggi's family announced it would receive condolences at his home in the Saudi coastal city of Jeddah starting Friday.

The wake will go on for three days, per Muslim tradition.

Khashoggi's son Salah wrote on Twitter a prayer for his late father, pleading God to give the family patience. Khashoggi's fiancée Hatice Cengiz also wrote a similar prayer on Twitter following the announcement.