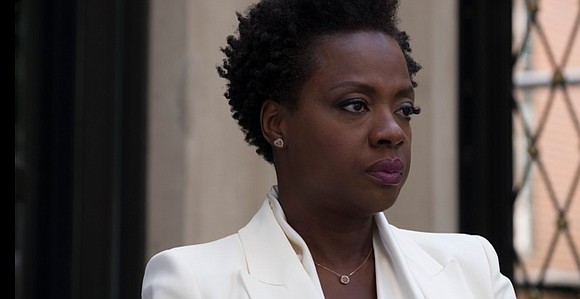 "Widows" is a wildly uneven crime caper, one with more valleys than peaks. Juggling too many threads, the film delivers strong and twisty moments -- and a feminist hook -- but largely squanders its impressive array of talent, headed by Viola Davis.

The plot actually has a pretty basic backbone to it, and a durable one at that. Originally a 1980s British miniseries from "Prime Suspect" creator Lynda La Plante, it was remade 20 years later, and bears a resemblance to NBC's recent series "Good Girls," in which three suburban women have to resort to crime.

As the title suggests, the women here are the widows of a heist gone wrong, which ended with their husbands dying in a fiery crash. Veronica (Davis) has the most to lose, since a local crime boss, Jamal Manning ("Atlanta's" Brian Tyree Henry) is the one who was robbed, and he wants his $2 million back in a month's time, or else.

Veronica's husband Harry (Liam Neeson) had been a master thief, enabling the couple to live in luxury. But dark aspects of their past gradually emerge, even as Veronica discovers a book that maps out Harry's next planned job, deciding to undertake it with the other widows --all left financially bereft by the deaths -- in order to make Veronica's Manning problem go away, and get themselves solvent again.

"This is not your world," Veronica is warned, which, in the women's determination to prove that wrong, is just one of the female-empowerment elements at play.

All that would be enough, seemingly, to give "Widows" a strong narrative hook, including the personal stories of the other widows, played by Michelle Rodriguez, Elizabeth Debicki ("The Night Manager") and Carrie Coon ("The Leftovers").

Condensing the miniseries into movie form, however, overwhelms the script by director Steve McQueen ("12 Years a Slave") and "Gone Girl" novelist Gillian Flynn, which also takes several detours -- including race, gun violence and Chicago politics, as Manning tries to go legit by running for alderman against a privileged son (Colin Farrell) whose family has run things in the ward for decades.

The strength of the casting, notably, goes well beyond that, including Cynthia Erivo -- who joins the plot too late in the game to fully register -- Daniel Kaluuya ("Get Out") as Jamal's ruthless henchman, and Robert Duvall as Farrell's imperious father.

Davis -- grieving, angry and a virtual force of nature -- provides the movie with a sturdy core, and she's the best incentive to see it. Yet even she gets lost at times amid the maelstrom of events swirling around her, and while the script brings the pieces together, the ending feels rushed and unsatisfying after all the meticulous "Ocean's"-movie-style planning and buildup.

"Widows," in some respects, feels like a throwback -- an old-fashioned, intricately plotted crime thriller that's more about characters than explosions. Much like the heist scheme, though, the movie looks better on paper, ultimately, then it does in the execution.