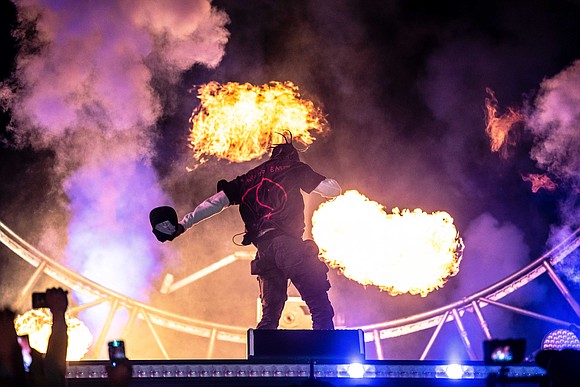 I know this might’ve been a childhood dream of yours, but what you brought to the city was a spectacle for all.

If you woke up the next day after the highly anticipated festival not sore, you might’ve transformed into an alien afterwards, lucky you. Beer bottles, sunglasses, a few barefoot bystanders, the mud, it was an ultimate experience this city will be talking about until the next one in 2019. The first-ever Astroworld Festival was sold-out, and you knew it because there were over 40,000 event goers from across the globe that flooded NRG Park. Side note: I heard a random festival attendee saying they were going to hit up the Turkey Leg Hut. Travis didn’t just bring the festival; he stimulated the economy.

When attendees arrived, you knew you were in the right place because his signature tag-line for his tour “Wish You Were Here” was everywhere including the center of the Ferris wheel. There were a ton of selfie actions happening near Travis’ famous Astroworld inflatable head when you first walked into the festival. The legendary Screwed Up Record & Tapes had a replica pop-up store, which was a nice touch in paying homage to an H-Town icon, DJ Screw. Attendees got a chance to purchase exclusive merchandise at the pop-up store as well as see the historical archive of every chopped-and-screwed mixtape ever produced by the acclaimed DJ. Speaking of merchandise, the lines to get Astroworld souvenir shirts and more were out-of-this-world long, but it moved pretty quickly.

In between the two-stages, Thrills, and Chills, there was a 35-foot-high planetarium that featured a 360-degree 4K-HD projection across the dome, as well as an arcade and lounge. The visual content inside was custom to the festival and was meant to make attendees feel as though they were drifting through space, while Travis Scott’s latest album ‘Astroworld’ played continuously in the background.

Sheck Wes performed his hit record, “Mo Bamba”. To see thousands upon thousands of fans swarming to the Thrills stage to turn up was bananas. Each performer shared their unique style with us. There was one thing a-like, the fans created random hurricane-like mosh pits (to get pushed and shoved around was an act of love for some).

The Houston All-Stars was a sight to see. DJ Mr. Rogers was mixing classics for the crowd. From Bun B kicking the stage off with hits like “Get Throwed”, Paul Wall performing “Grillz” to Lil’ Flip giving us a trip down memory lane with “Game Over”, it was a historical moment for the city to see Texas OGs and even new stars reppin’ in unison. Travis was feeling the performances so much, he got on the mic backstage making a special request for Lil’ Flip to perform two more songs.