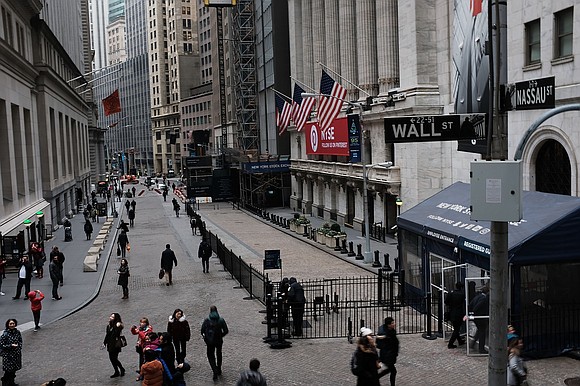 America's economy is still growing robustly, but a string of possible outside shocks including President Donald Trump's protracted trade rift with China could trigger a downturn, according to a report released by the Federal Reserve on Wednesday.

(CNN) -- America's economy is still growing robustly, but a string of possible outside shocks including President Donald Trump's protracted trade rift with China could trigger a downturn, according to a report released by the Federal Reserve on Wednesday.

The US central bank warned, in its first report on vulnerabilities in the financial system, that escalating trade tensions with Beijing and other sources of geopolitical uncertainty could spark a decline in investor appetite for risk — a problem given the recent run-up in stocks and other assets.

"The resulting drop in asset prices might be particularly large, given the valuations appear elevated relative to historical levels," the Fed cautioned in its report, which outlined a number of risks facing the American economy a decade after the financial crash.

A "significant fall" in asset prices would make it more costly for nonfinancial businesses, which are already highly leveraged, to obtain funding, the Fed cautioned.

The report found that funding risks are relatively "low" compared to the period leading up to the financial crisis. But the Fed pointed to a few potentially problems that could leave markets and institutions vulnerable. Among them: "historically high" business debt, deteriorating credit standards and bigger appetite for risk-taking by investors.

Markets are jittery in the lead up to a critical meeting on Saturday between Trump and his Chinese counterpart, Xi Jinping, at the G20 summit in Buenos Aires.

The meeting comes at a pivotal moment in the trade war between the world's two largest economies. Many people, including Trump, say they are hopeful the two leaders will reach a breakthrough and avoid further tariffs. Trump has threatened to launch a third round of tariffs on $267 billion in Chinese goods if he and Xi fail to end their impasse.

Even in the face of such headwinds, policy makers said a resilient banking system shielded with larger stores of capital and cash cushions would be "less likely to amplify the effects of falling asset prices."

Financial markets have swooned, erasing much of the gains over the past year as investors. Investors already bracing for higher interest rates now face the possibility of inflation, stemming in part from Trump's trade wars as well as the tax cuts he pushed through Congress late last year.

The fresh volatility has prompted Trump to blame the Fed for the wobbling stock market. He has repeatedly bashed Fed Chairman Jerome Powell, a Republican investment banker he appointed and described last year as a "wise steward." He has more recently called the Fed "crazy" and "loco" over recent interest-rate increases.

In an sweeping interview published Tuesday by The Washington Post, the President blasted his chairman and once again expressed his unhappiness with the Fed, while hastening to add he isn't blaming anyone for his decision to tap Powell for the job.

"I'm doing deals, and I'm not being accommodated by the Fed," Trump said in the interview. "They're making a mistake because I have a gut, and my gut tells me more sometimes than anybody else's brain can ever tell me."

In its report, the Fed also warned that markets and financial firms will need to continue to adjust to plans for future rate hikes after years of low interest rates following the financial crisis. The central bank is expected to raise rates once more next month, bringing the total to four this year.

"Even if central banks policies are fully anticipated by the public, some adjustments could occur abruptly, contributing to volatility in domestic and international financial markets and strains in institutions," according to the Fed report.

Other external risks flagged by the central bank include the British government's plan to leave the European Union, China's slowdown and a significant increase in either corporate or sovereign debt by emerging market economies in Turkey and Argentina.

"Should significant problems arise in China or in EMEs more broadly, spillovers, including dollar appreciation, declines in world trade and commodity prices, and a pullback from risk-taking by investors outside the affected markets, could be sizable," said the Fed in its report. "In addition, the effect of a stronger dollar and weaker foreign economies on trade could affect the creditworthiness of U.S. firms, particularly exporters and commodity producers."