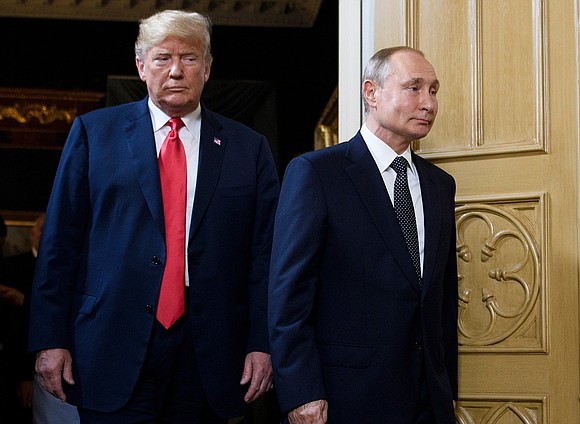 A meeting between US President Donald Trump and Russian President Vladimir Putin will go ahead on Saturday on the sidelines of the G20 summit in Argentina, the Kremlin said.

(CNN) -- A meeting between US President Donald Trump and Russian President Vladimir Putin will go ahead on Saturday on the sidelines of the G20 summit in Argentina, the Kremlin said Thursday.

Trump suggested in an interview Tuesday that he might cancel the get-together after Russian ships opened fire on and seized three Ukrainian vessels near Crimea, in a clash that western European leaders have taken as an act of Russian aggression.

The White House has not publicly confirmed the meeting and did not immediately respond to CNN's requests for comment.

Kremlin spokesman Dmitry Peskov, however, said that the White House had confirmed the meeting and laid out the Presidents' agenda.

Peskov said the meeting would take place Saturday at around noon, while Russian state media reported the leaders would meet at the Park Hyatt in Buenos Aires.

The time frame for the meeting was "quite tight," Peskov said, adding there would be "a brief conversation between the presidents, as we expect, and then negotiations, which can last about an hour."

If it goes ahead as scheduled, it will be the first such sit-down between the two men since they met for more than two hours in Finland in July with only their translators present.

That much-maligned meeting saw Trump forsake the US intelligence community's conclusions of Russian interference in the 2016 US election in favor of amplifying Putin's denials.

National Security Advisor John Bolton told reporters Tuesday that if the two leaders did meet, Trump would discuss security, arms control and regional issues with Putin. "I think it will be a continuation of their discussion in Helsinki," he said.

Bolton did not confirm whether the situation in Ukraine would be on the table.

Trump waited more than 24 hours after the maritime clash on Sunday before he commented on the incident. In response to reporters' questions, the President said he was "not happy about it at all," then indicated he might see fault on both sides, saying, "we do not like what's happening either way."

Other world leaders quickly issued statements condemning the clash and urging a de-escalation.

The November 25 confrontation ended with three Ukrainian ships in Russian custody and 24 Ukrainian sailors in detention. Kiev and Moscow have offered conflicting accounts of what happened, each accusing the other of violating the laws of the sea.

In an interview with German newspaper Bild, Poroshenko said he hoped for naval support from NATO.

"Germany is one of our closest allies, and we hope that states within NATO are now willing to deploy naval vessels to the Sea of Azov in order to support Ukraine and to guarantee its safety," Bild quotes him as saying.

"We cannot accept Russia's aggressive policy. First, it was Crimea, then eastern Ukraine, now he wants the Sea of Azov. Germany also has to wonder: what will Putin do next if we don't stop him?"

Ukraine is not a NATO member, but on Tuesday the alliance condemned Russia's use of force and said it "stands with Ukraine."

Russian Foreign Ministry spokeswoman Maria Zakharova suggested Wednesday that some Western countries may have participated in planning the incident in the Kerch Strait.

"This is a deliberate provocation. I don't have any doubts that some of our Western partners knew about it or even participated in planning it. This is why all of this is not accidental," Zakharova told Russia's Channel One, according state news agency TASS. "The assessments that we hear and the informational campaign underway right now, only prove it," she said.

Hours earlier, Putin said there were "clear signs of a provocation prepared in advance" by Kiev "as a pretext to impose martial law in the country" for domestic political ends.

On Wednesday, the European Union expressed its "utmost concern about the dangerous increase of tensions" in the Kerch Strait and Azov Sea and called for the "utmost restraint to de-escalate the situation immediately," as well as the swift release of the seized Ukrainian ships and crew.