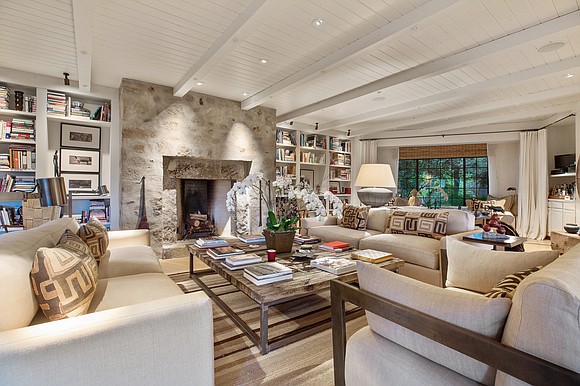 Robert Redford's Napa Valley home and a Palm Springs home where Dean Martin partied are for sale and featured this week at TopTenRealEstateDeals.com.

Not one of Hollywood’s 'Ordinary People,' especially when it comes to super-star actor, director and supporter of the arts, Robert Redford recently celebrated his 82nd birthday and announced his retirement as an actor. His final film, 'The Old Man & His Gun' in which he stars with Sissy Spacek and Casey Affleck and plays a real-life career criminal and escape artist was released in September to rave reviews.

For decades, Redford’s permanent residence has been in Utah, home of his Sundance Institute. He and his artist wife, Sibylle Szaggars, also own a Napa Valley home where they enjoy hobbies and hosting family and friends. The Redfords have enjoyed the home for 14 years and have now decided to move back to the Bay Area near family and put their beloved Napa home on the market. It is priced at $7.5 million.

Redford's charming Napa getaway, named Danza del Sol, lies perched on a knoll on 10 ultra-private acres surrounded by woods and vegetation with walking paths. The compound includes the main house, a 90-square-foot artist studio/guest house and two large garages. The 5,200-square-foot main house is modest by film mogul standards with three bedrooms, four bathrooms, a large great room, den, library-office, sunny white kitchen and formal dining room. Multiple wood-burning fireplaces exist throughout the home. The quaint studio/guest house has a huge open space filled with light from a wall of French doors and double garage door that rise high into the vaulted ceiling. One of the two garages houses a large workshop and exercise studio. Terraces by the pool, spa and outdoor dining areas offer calming views and are perfect for entertaining.

The Napa Valley estate of Robert Redford is now for sale upon his retirement. Priced at $7.5 million, the listing agent is Steven Mavromihalis of Pacific Union International, San Francisco. 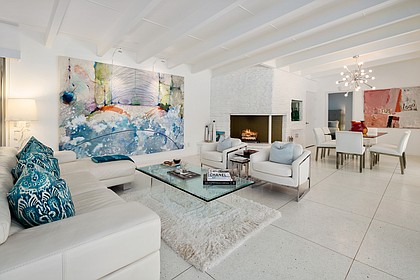 Dean Martin, who would have turned 100 last year, was a singer, comedian, actor and Rat Pack partier with pals Frank Sinatra, Sammy Davis Jr., Joey Bishop and Peter Lawford. In reality, Dean was more of a family man than he was given credit for, considering his stage persona as a tipsy skirt chaser. He was a teetotaller and early to bed when he wasn’t working the Las Vegas nightclubs. Dean and his wife, Jeanne, had many friends outside of the Rat Pack clan including close friends in Palm Springs who they would visit often, enjoying a complete break from show business. The friends’ house was a classic Palm Springs mid-century modern home spaciously designed for entertaining. Martin gifted them a white baby grand piano so he could play and sing for their guests at Sunday afternoon tea dances, which he and his wife hosted. The house, including the original baby grand is now for sale, asking $1.8 million.

Cloaked in walled privacy and thick vegetation around its circumference but still with commanding views of the San Jacinto Mountains, the home is sited on over a quarter-acre lot, 2,342 square feet, three bedrooms and three baths. Crisp white walls beg for the display of an art collection and terrazzo floors throughout guarantee a low maintenance lifestyle. Floor-to-ceiling glass walls traverse the back of the house, an angular fireplace can be viewed from the dining and living areas and the large eat-in kitchen is filled with high-end appliances. Furnishings, almost all of which are included in the sale, include top designers of the 20th century such as Milo Baughman and Miles Van der Rohe.

Dean Martin’s favorite weekend family hangout, The Tea Dance House, is now for sale, including the storied piano and most of the classic furnishings. Priced at $1.8 million, the home is listed by Brandi Pratt of The Agency, Beverly Hills.