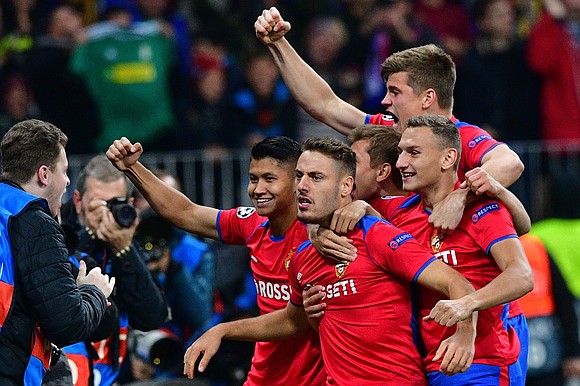 Croatian winger Nikola Vlasic scored the only goal of the game after just two minutes in the Luzhniki Stadium.

Thirteen-time winners Real hit the woodwork three times in search of an equalizer and the Russians had goalkeeper Igor Akinfeev sent off for dissent in injury time, but held on for a famous victory.

The win put CSKA top of Group G on four points, with Real and Roma sharing second spot a point behind.

Toni Kroos was to blame for CKSA's goal, his awful backpass intercepted by Vlasic, who is on loan from Premier League Everton.

Real, missing key players such as Sergio Ramos and Gareth Bale, has now failed to score in three straight games after a promising start to life without Cristiano Ronaldo.

Meanwhile Jose Mourinho's misfiring Manchester United team was held to a scoreless draw by Valencia with a lackluster performance doing little to lift the gloom hanging over Old Trafford or the question marks over the manager.

After United's worst start to a league season in nearly 30 years and with Mourinho involved in a public spat with his French World Cup star Paul Pogba, a convincing home victory over the Spanish visitor would have served as the ideal tonic.

But clear cut chances proved few and far between as a muted Red Devils struggled to break down a determined Valencia rearguard.

The best fell towards the end with Marcus Rashford rattling the crossbar from a free kick and both Pogba and Romelu Lukaku going close.

But Valencia also created openings, with Michy Batshuayi firing over after Cristiano Piccini had left Pogba in a heap and crossed for Rodrigo to nod down to the striker.

United is still seeking its first home win since August with Mourinho hinting that some of his players have been lacking commitment.

His programme notes called for his stars to play for the crest of the club rather than the name on their back, but while there was no lack of effort the crucial cutting edge was missing.

Earlier, Juventus made light of the absence through suspension of Cristiano Ronaldo with a 3-0 home win over Young Boys in Turin as Argentina striker Paulo Dybala scored a hat-trick.

Ronaldo, given a one-match ban after being sent off in Juve's 2-0 win over Valencia in the first round of games, watched the match from the stands,

He saw an assured performance from his new side with Dybala opening his account from a Leonardo Bonucci pass in the fifth minute before doubling the advantage just after the half-hour mark.

Juan Cuadrado set him up for his hat-trick in the 69th minute before Young Boys had Guinean central defender Mohamed Ali Camara sent off for a second yellow card.

Juventus has won all its nine games since Ronaldo arrived from Real Madrid, seven in the league and two in the Champions League.

"We were without Cristiano, and at times it's easier with him in the side, but we have to be a great team both with and without him," said Dybala.

Juventus top Group H with six points, from United with four ahead of a crunch double header for which Ronaldo will be available to play against his old side.

In Tuesday's other early kickoff, one of the pre-tournament favorites Manchester City needed a late goal to win at Hoffenheim.

The German side stunned City with a 43-second goal as Ishak Belfodil beat goalkeeper Ederson.

Pep Guardiola's men had already lost its opener at home to Lyon but were quickly back on terms when Sergio Aguero converted after a fine run and cut-back by Leroy Sane.

It looked headed for a draw until David Silva seized on a mistake by Stefan Posch and scored an 97th-minute winner.