Cardi B on what sparked that Nicki Minaj fight 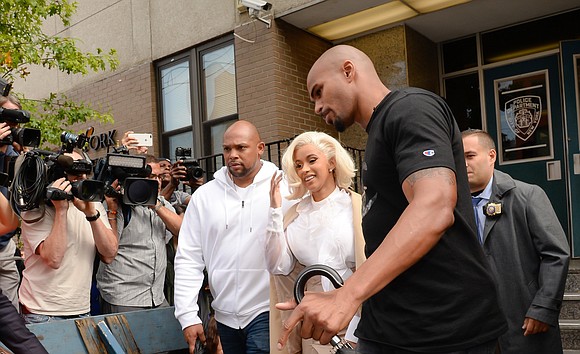 (CNN) -- We now know what exactly sparked Cardi B going after Nicki Minaj at a New York Fashion Week party.

In a profile with W, the rapper opened up about everything from her feud with Minaj to her insecurities over husband rapper Offset's potential for infidelity.

After the altercation, Minaj lashed out at Cardi B on her Beats 1's "Queen Radio" show.

"You're angry and you're sad. This is not funny," Minaj said of her rival. "Get this woman some f*ing help. This woman's at the highest point in her career and she's throwing shoes?"

But Cardi B told W it wasn't the first time she's had issues with Minaj.

"For a while now she's been taking a lot of shots at me," Cardi B said. "I spoke to her twice before, and we came to an understanding. But she kept it going."

Cardi said it all came to a head after saw that Minaj had liked, and then unliked, a tweet being critical of Cardi's mothering skills.

Minaj has denied that happened, but Cardi B said it was a bridge too far for her.

"I was going to make millions off my Bruno Mars tour, and I sacrificed that to stay with my daughter," Cardi B said. "I love my daughter. I'm a good-ass fking mom."

"So for somebody that don't have a child to like that comment," the rapper continued. "So many people want to say that party wasn't the time or the place, but I'm not going to catch another artist in the grocery store or down the block."

Cardi B said her pregnancy wasn't planned and she said her husband Offset, who is a member of the rap group Migos, assured her that her career would be fine despite her being so new on the music scene.

He has three children with three other women and he and Cardi B secretly married months before he publicly proposed onstage during one of her performances.

She said it's been a struggle keeping her insecurities in check with the constant speculation about Offset's fidelity.

"Every single day there's rumors about me and my dude," Cardi B said. "And it almost drives me crazy, because I start to believe them. I don't have no proof. I don't have receipts."

The rapper also said she received some valuable advice from Kardashian-Jenner matriarch Kris Jenner about dealing with the haters.

Cardi B said she ended up hanging out with Jenner for seven hours after the momager invited her to her home.

"Kris told me, 'People are going to talk badly about you, but it doesn't really matter as long as you're making money,' " Cardi B said. "And it's true. If you read the online comments, it seems like everybody hates the Kardashians. Each and every one of them. But how can that be true if everything they sell sells out?"