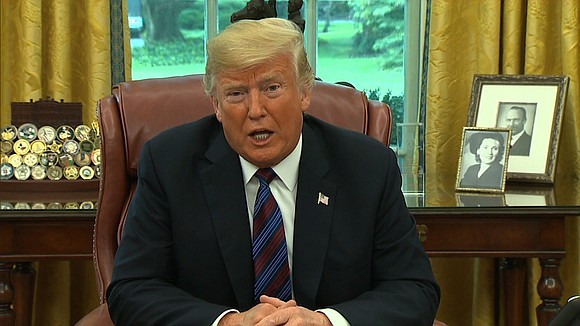 (CNN) -- President Donald Trump suggested Monday that "rogue killers" could be behind the disappearance of Saudi journalist Jamal Khashoggi, after a phone call with Saudi Arabia's King Salman over the case.

Trump told White House reporters that Salman offered him a "flat denial" in relation to the disappearance of Khashoggi, a columnist for The Washington Post who was last seen in public when he entered the Saudi consulate in Istanbul in Turkey on October 2.

Secretary of State Mike Pompeo left Washington for Riyadh at around midday to meet with the Saudi King on Trump's orders.

Saudi authorities maintain Khashoggi left the consulate the same afternoon of his visit, but have provided no evidence to support the claim. Khashoggi's fiancée, Hatice Cengiz, who was waiting outside the consulate, says she did not see him re-emerge.

"It wasn't like there was a question in his mind. The denial was very strong," Trump said of King Salman.

"It sounded to me like maybe these could have been rogue killers, who knows," Trump said. It was not clear whether Trump was offering his own analysis or whether the suggestion came from Salman.

"We are going to try to get to the bottom of it very soon," Trump added. "But his was a flat denial."

CNN reporters saw Turkish investigators, including forensics officers, entering the Saudi consulate in Istanbul Monday evening. Saudi officials had granted permission for the premises to be searched, a Turkish diplomatic source told CNN, and police were seen cordoning off the area before investigators arrived. Turkish officials also want to search the nearby consul general's residence.

Turkish authorities believe 15 Saudi men who arrived in Istanbul on October 2 were connected to Khashoggi's disappearance and possible murder. At least some of them appear to have high-level connections in the Saudi government.

A source familiar with the ongoing investigation told CNN on Friday that Turkish authorities have audio and visual evidence that shows journalist Khashoggi was killed inside the consulate.

International pressure is mounting on Riyadh to explain the journalist's disappearance, in a case that has created a diplomatic rift between Saudi and the West. The UK, France and Germany have demanded a "credible investigation" into the events and Trump on Sunday warned of serious retribution if the Saudis were found to be behind his possible death.

Saudi officials threatened to retaliate if the US imposed sanctions, but Riyadh later softened its tone.

The case has also caused friction between Saudi Arabia and Turkey, which has repeatedly accused the Saudis of failing to cooperate with their investigation.

The agreement to allow a search of the consulate comes a day after King Salman called Turkish President Recep Tayyip Erdogan to discuss the case. The two leaders agreed on a joint working group to look into the journalist's disappearance.

The Saudi official said that a royal decree was issued Friday directing the public prosecutor to conduct an internal investigation into the Khashoggi case, based on intelligence shared by Turkey with Saudi Arabia.