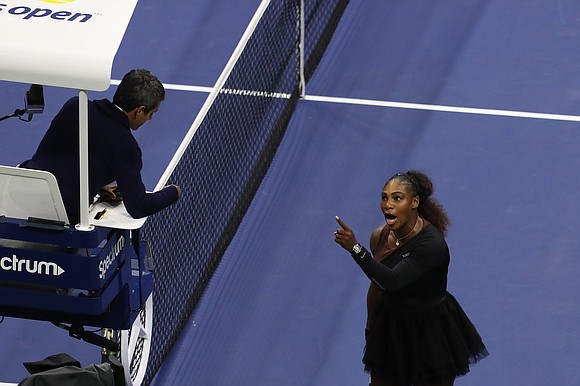 The US Open has fined Serena Williams $17,000 for three code violations during her loss in Saturday's women's singles final, the United States Tennis Association said. CREDIT: Jamie Lawson/Getty Images for U

The tennis superstar found herself in the middle of controversy after this weekend's US Open final.

Williams lost to Japan's Naomi Osaka and was sanctioned fines totaling $17,000 for three violations after a heated exchange with umpire Carlos Ramos.

Ramos had issued the violations against Williams after she accused him of being unfair during Saturday's match.

The 23-time Grand Slam champion has faced racist attacks for most of her career, and after the match Saturday, said she believes sexism is rampant in the tennis world.

Serena Williams is calling out sexism in tennis. Here's why.

"Well done on reducing one of the greatest sportswomen alive to racist and sexist tropes and turning a second great sportswoman into a faceless prop," Rowling tweeted along with Knight's tweet of his drawing.

Actress Reagan Gomez also tweeted about the cartoon, writing "It's not just about sexism."

"The other player (not Naomi???) isn't drawn the way Serena is," Gomez wrote. "You know why. Anyone who tells you this isn't misogynoir is gaslighting you. Don't allow them to."

Several celebs took to social media over the weekend to support both Williams and Osaka.