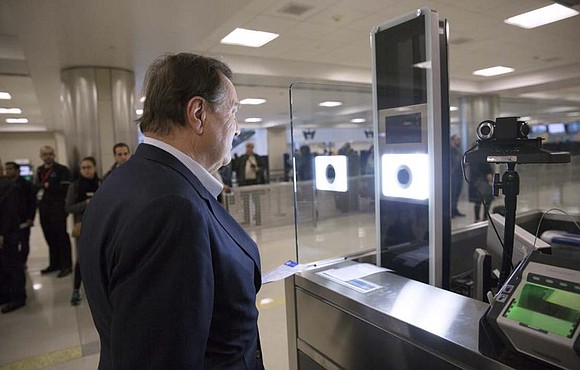 As part of CBP’s one-to-one biometric facial recognition testing on inbound, international flights, a traveler has his photo taken and compared against his passport photo to confirm his identity at Dulles Airport. Photo by Glenn Fawcett

HOUSTON – U.S. Customs and Border Protection (CBP) officers at George Bush Intercontinental Airport are using facial recognition technology to add efficiency and security to international arrival and it has already identified an imposter.

There are three instances since CBP began using the technology that it revealed the passport holder to be an imposter. A biometric entry-exit system based on facial recognition allows for a simpler and easier airport experience.

During an inspection with a traveler arriving from Chile, CBP officers determined there were possible inconsistencies between the traveler and the document presented. The facial recognition technology confirmed the traveler was an imposter.

“Those seeking to evade detection are frequently using a non-altered travel document legitimately issued to another person,” said Houston CBP Port Director Shawn Polley. “The absolute best way to combat this type of fraud is to biometrically verify that a person who presents a travel document is the true bearer of that document.”

Under this process, CBP uses airline manifest data to retrieve existing traveler photographs from government databases, including passports and visas, to build a photo gallery of travelers who are expected to arrive in the United States.

At the inspection booth, CBP captures a “live image” of the traveler and matches it to a photograph in the pre-assembled gallery. Both the live image and the gallery photograph are displayed to the CBP officer along with the traveler’s biographic data.

The facial recognition technology uses a matching service to verify the traveler’s identity while a CBP officer interviews travelers to establish purpose and intent of travel.

CBP is committed to its privacy obligations and has taken steps to safeguard the privacy of all travelers. CBP has published several Privacy Impact Assessments, employed strong technical security safeguards, and has limited the amount of personally identifiable information used in the new biometric process.