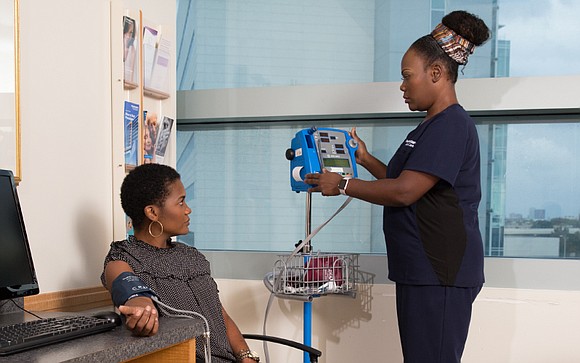 High blood pressure rates could nearly double in women of childbearing age if the latest guidelines are used, according to a new study. But researchers say more investigation is needed to see if those lower blood pressure targets in pregnant women are safe – or effective.

The AHA/ACC guidelines apply to all adults and don’t specifically address blood pressure targets during pregnancy. It notes that hypertension in pregnancy has special requirements and provides recommendations on types of antihypertensive medications to use or to avoid during pregnancy. Although the scope of the AHA/ACC guidelines doesn’t address pregnancy in detail, it defers to the ACOG guidelines as a source for how to manage high blood pressure in pregnant women.

Researchers from Emory University School of Medicine analyzed data from women ages 20 to 44 and found an almost twofold jump in the number of women considered to have high blood pressure. The number rose from 10.2 percent under the ACOG guidelines to 18.9 percent under the AHA/ACC guidelines.

“Based on new guidelines, about twice as many women of reproductive age will carry a diagnosis of hypertension,” said the study’s lead author, Dr. Matthew Topel, a cardiology research fellow at Emory University School of Medicine in Atlanta. “It may be reasonable to consider lowering the blood pressure threshold for hypertensive disorders of pregnancy to 130/80, but further investigation into this issue is needed.”

Topel said young women usually have a low risk for adverse effects of high blood pressure. But among women who become pregnant, hypertension is associated with risks for both the mother and child, including stillbirth, fetal growth restriction and preeclampsia.

Preeclampsia is a serious condition usually characterized by high blood pressure and elevated protein in the urine. It can endanger the lives of both the child and the mother. Women with high blood pressure during pregnancy are also five times more likely to have a stroke than those with normal blood pressure.

Dr. Alisse Hauspurg, an obstetrician and researcher who was not involved in the new study, said the results could, in theory, have significant implications for how doctors and pregnant women manage high blood pressure.

Obstetricians generally don’t recommend major lifestyle changes for pregnant women with high blood pressure, as they might for non-pregnant women with hypertension, said Hauspurg, a maternal-fetal medicine fellow at the University of Pittsburgh Medical Center. Instead, they focus on increased maternal and fetal monitoring, including growth ultrasounds and fetal heart monitoring.

“It’s not as straightforward as it is in the non-pregnant population,” Hauspurg said. “In pregnancy, blood flow to the uterus and placenta are also important to ensure adequate fetal growth. If we lower women's blood pressure outside of pregnancy, we know it reduces the risk of stroke and heart disease, but there may be negative effects on pregnancy or growth of the baby. We just don't know the answer to that yet.”

Until more research is done, she said she will continue to use the ACOG guidelines since those are specifically for treating pregnant women with high blood pressure.

“The study is an important step forward in understanding the impact of the changing guidelines,” she said. “But we’d still need larger-scale studies and a definitive clinical trial before we would make changes to how we practice in terms of obstetrics.”