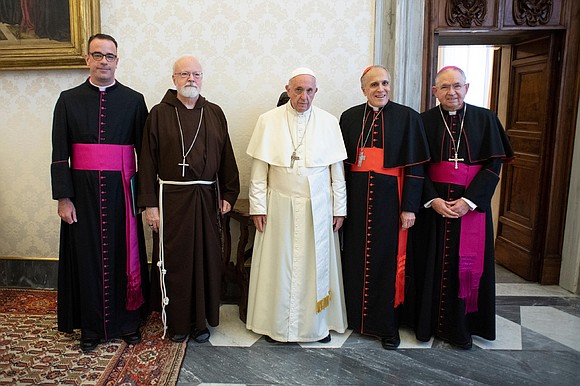 (CNN) -- Struggling to contain one of the most serious crises of his papacy, Pope Francis met Thursday in Rome with leaders of the American Catholic Church, the epicenter of a rapidly escalating clergy sex abuse scandal.

"We shared with Pope Francis our situation in the United States -- how the Body of Christ is lacerated by the evil of sexual abuse. He listened very deeply from the heart. It was a lengthy, fruitful, and good exchange," said Cardinal Daniel DiNardo, president of the U.S. Conference of Catholic Bishops.

"As we departed the audience, we prayed the Angelus together for God's mercy and strength as we work to heal the wounds. We look forward to actively continuing our discernment together identifying the most effective next steps."

Also attending the meeting were Cardinal Sean O'Malley of Boston, president of the Pontifical Commission for the Protection of Minors; Archbishop Jose Gomez, vice president of the U.S. Conference of Catholic Bishops; and Monsignor Brian Bransfield, the conference's general secretary.

Neither DiNardo nor the U.S. Conference of Catholic Bishops announced any new steps or policies after Thursday's meeting. The Vatican referred reporters to DiNardo's statement.

DiNardo, archbishop of the Archdiocese of Galveston-Houston, requested the meeting with Pope Francis as the Catholic Church in the United States faces clergy sex abuse scandals on several fronts.

In the latest development, the Pope accepted the resignation of a West Virginia bishop and ordered a church-run investigation into allegations that the bishop sexually harassed adults, church officials said.

Those allegations, as well as an explosive letter from a formal papal diplomat, have raised serious questions among senior church leaders about why McCarrick was allowed to rise through the church's ranks as well as who knew about the sordid accusations against him.

Those reports come on top of a 900-page investigative report released last month by a grand jury in Pennsylvania that found more than 300 priests had sexually abused more than 1,000 children in six dioceses in the state since 1947, often while church leaders covered up the crimes.

In DiNardo's August letter, he said the bishops' executive committee had three goals: opening an investigation "into the questions surrounding" McCarrick; opening "new and confidential channels" for reporting complaints about bishops' misconduct; and advocating for more effective ways to resolve future complaints.

"We have already begun to develop a concrete plan for accomplishing these goals, relying upon consultation with experts, laity, and clergy, as well as the Vatican," DiNardo wrote on August 16. "In addition, I will travel to Rome to present these goals and criteria to the Holy See, and to urge further concrete steps based on them."