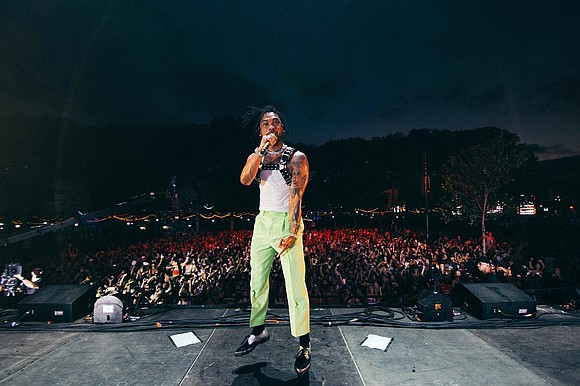 As a follow up with the fans for his fourth studio album, War & Leisure, Miguel made a stop in Houston on his The Ascension Tour, and the city couldn’t have been any happier. On tour with Miguel was his talented brother Nonchalant Savant and Drake’s label Ovoo hit Canadian R&B group DVSN.

The Ascension Tour brought out a very friendly and diverse crowd from near and far under one roof to fall in love with music again. Lines were wrapped around the Revention Music Center in the heart of downtown as people trickled in to embark on what was to be an explosive treat. One fan, in particular, a semi-pro football coach, mentioned that this was his first time seeing Miguel in person and he came to be won over as a fan— he was.

The stage was lit up vibrantly as fans encompassed that platform to get as close as possible to lose themselves in music matrimony. It was simplistic yet illuminating with the right display of synchronization of emotions through a phone message and a woman’s eyes filled with tears. First to step into that setting was Nonchalant Savant. He channeled Bob Marley and island vibes during his performance. There was no doubt he was related to Miguel. The energy was all there. The groovy singer gave chill vibes as he soothed the audience with “mixed signals” as the crowd swayed to his melodic tones. Savant worked the stage as he hyped the crowd into an energy wave that kept growing.

Next up was DVSN who took the stage with a 3-lady powerhouse back-up that could sing a dead plant to live. It was incredible. Scanning the crowd, one could definitely tell the house was feeling Daniel Daley as ladies and even the fellas were singing to the gods and moving to the vibe of “Think About Me.” Married or single, Daley made chills go up one’s spine as he took you to a place in your life where it was relatable. What really set the occasion off was his tribute to recognizable R&B classics like Alicia Keys’ “If I Ain’t Got You”, Usher’s “U Got It Bad,” Boyz II Men’s “End Of The Road,” and other hits. It was like a time warp of the late 90s-2000s morphed into present times—R&B lives in the now. Daley’s falsetto game is so on point.

The show rolled over to headliner Miguel who gave the ladies a thrill and allowed the fellas a chance to show off their dance moves. It was a party, indeed, as Miguel’s full band sent riffs right into concertgoers’ souls. Multi-talented in many ways, Miguel jumped on the guitar to give the ladies what they've been asking for all night. If you have never seen Miguel perform live, imagine the legendary Prince Roger Nelson giving birth to a son. There was a moment where Miguel gave the crowd a message to not be afraid of who you are and staying true to yourself— and everyone felt what he was saying. Miguel sang hits like “Now” from War & Leisure, a bold dedication to social injustice of immigration detention, and, took it back to “How Many Drinks” on Kaleidoscope Dreams project. As he continued through the night he intermingled some new material. Could there be another album brewing?

Miguel kicked his The Ascension Tour off in Boston, MA earlier this year on August 23rd. Upon leaving Houston he is continuing to make his presence across North America and Canada at some of the nation’s coolest festivals and venues until the tour ends on September 28th in Seattle, WA.

For more information on The Ascension Tour, visit officialmiguel.com.