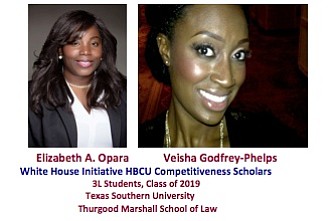 (HOUSTON, TX – September 18) Third-year, Thurgood Marshall School of Law students, Elizabeth A. Opara and Veisha Godfrey-Phelps have been named 2018 HBCU Competitiveness Scholars by The White House Initiative on Historically Black Colleges and Universities (WHIHBCU)—a student recognition program which honors outstanding students for their academic merit, campus leadership, civic engagement and entrepreneurial spirit and empowers them to be advocates for excellence and competitiveness. As HBCU Competitiveness Scholars, both Opara and Godfrey-Phelps will attend the 2018 National HBCU Week Conference on September 16-19, 2018 in Washington, D.C. and be publicly acknowledged during the recognition ceremony on Monday, September 17. Both students will also receive an acknowledgment certificate signed by the Mr. Johnathan Holifield, WHIHBCU executive director.

On behalf of the WHIHBCU and as a result of this distinctive honor, both Opara and Godfrey-Phelps will serve as ambassadors of Texas Southern and the Houston community for the 2018-19 academic year. Likewise, the WHIHBCU will afford Opara and Godfrey-Phelps outreach and engagement opportunities, information and resources to share with fellow students on the University campus, as well as initiatives to engage with other WHIHBCU Scholars and WHIHBCU staff to improve leadership, encourage ongoing personal and professional development, and areas of innovation and entrepreneurship to explore ideas critical to lifelong growth and development.

Per Dr. Kendall Harris, provost and vice president for academic affairs at Texas Southern, “Entrepreneurship is important and I’m so glad that we have two highly qualified law students who will be participatory and represent TSU, locally and globally, in this White House Initiative.”

“We are so proud of our two students that have been selected and are confident they will provide substantial contributions to advance the concept of entrepreneurship in the HBCU arena,” says Gary L. Bledsoe, Esq., acting dean at Thurgood Marshall School of Law, located on the campus of Texas Southern University. “They both have shown great discipline, scholarship and a concern for others during their tenure at the Law School.”