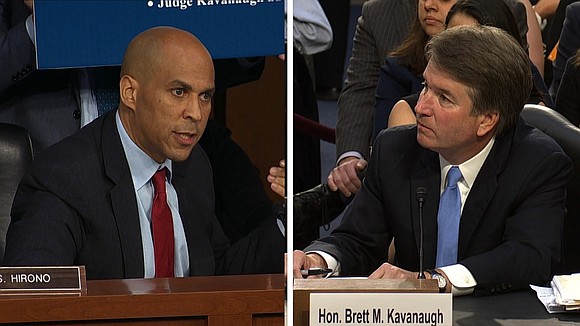 (CNN) -- As Washington continues to play a game of wait and see on whether Christine Blasey Ford, the woman accusing Supreme Court nominee Brett Kavanaugh of sexual assault, will testify in Washington next week, an old-but-new-again incident involving a prominent Democratic senator -- and potential 2020 challenger to Trump -- has reemerged.

New Jersey Sen. Cory Booker wrote in the early 1990s -- while a student at Stanford -- about an incident on New Year's Eve 1984 (when he was 15) in which he groped a female friend's breast after the two of them had kissed.

"With the 'Top Gun' slogan ringing in my head, I slowly reached for her breast," Booker wrote of that night. "After having my hand pushed away once, I reached my 'mark.'" The point of Booker's column was how that moment, and his work on the issue after, had changed him -- and his views on women, consent and assault -- forever. "It was a wake-up call," Booker wrote in his Stanford column. "I will never be the same."

With Booker, a member of the Senate Judiciary Committee, playing a high-profile role in pushing for an FBI investigation into the incident alleged by Ford, some Republicans -- and their aligned conservative websites -- have resurfaced the incident as evidence of Booker's hypocrisy. "Booker facing criticism for Kavanaugh reaction after admitting to groping friend in high school," read the headline on a piece on the Daily Caller website.

And, yes, it's true that there are some similarities between the two episodes: Both Booker and Kavanaugh were teenagers, and the incidents -- admitted to and alleged, respectively -- happened decades before they entered public life in any meaningful way. So why is Kavanaugh being raked over the coals -- and watching his nomination to the Supreme Court be jeopardized -- while Booker just gets a pass?

For a lot of reasons -- all of which explain why this comparison is overly facile and just doesn't hold up.(Nota bene: Kavanaugh unequivocally denies the allegations about him by Ford and has already accepted an invitation to testify under oath about his conduct next week in front of the Senate Judiciary Committee.)

First, and most importantly, the reason we know about the groping incident involving Booker is because Booker told us about it. He wrote publicly about it -- and used it as a way to explain how he evolved as a person. While that doesn't absolve him of his behavior -- just because you admit something publicly and apologize doesn't mean you didn't do it -- it does make for a very different situation than faces Kavanaugh.

Kavanaugh has never mentioned the alleged episode with Ford publicly before. (Kavanaugh and his defenders would insist that's because he didn't do it.) We are learning about the accusation from the alleged victim, not from the alleged perpetrator. No one -- including Booker -- disputes that he behaved badly as a teenager. The memories of Kavanaugh and Ford are totally contradictory, with both arguing that the other is simply wrong or misremembering the facts.

Second, the situations of Kavanaugh and Booker are different. Booker is an elected official who, every six years, stands before voters. If voters believe his groping incident -- or any other element of his past or present -- is disqualifying, they get to have their say. They can vote him out. That's not the situation in which Kavanaugh finds himself. He has been nominated to a lifetime appointment on the most powerful court in the country. The public won't ever get to offer up its judgment on his character -- that will be up to the 21 members of the Senate Judiciary Committee and, if he makes it through that vote, the full Senate. Just 100 people in the country will get a one-time-only vote on whether or not Kavanaugh has the judgment and temperament to sit on the Supreme Court and offer his opinions on the pressing issues of today -- and lots of tomorrows. That's a very different thing than a senator -- or even a president -- who has to face millions (or tens of millions) voters every four or six years.

All of that is important -- not just for whether or not Kavanaugh gets confirmed but for us as a society. For too long, these sorts of questions were dismissed. The rise of the #MeToo movement and the cavalcade of high-profile men admitting to behavior that ranges from boorish to criminal has opened eyes and forced uncomfortable and important conversations. The accusations against Kavanaugh are another moment to examine our assumptions and talk openly about how we should bets approach these situations -- both now and going forward.

What we don't need amid all of this is an epic bout of "whatboutism." What Booker did as a teenager wasn't right. And he has been and will be judged by voters on them. But to turn Booker into a political missile to prove hypocrisy misses the mark. This isn't about Booker. This is about Ford, Kavanaugh, and how we, together, figure out the right way forward.