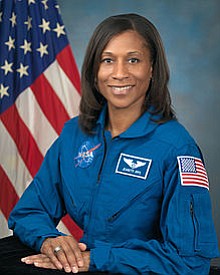 Astronaut Jeanette Epps, a Syracuse native, was guiding two astronauts at the International Space Station through a spacewalk from NASA’s mission control in Houston when there was a problem, according to a report. A panel on the space station would not open, so Epps suggested using a pry bar, Space.com reported. Her suggestion worked, and despite the stubborn panel the spacewalking mission was successfully completed. Epps, a Corcoran High School and Le Moyne College graduate, was supposed to go to the International Space Station as part of the Expedition 56/57 crew. She would have been the first African-American to live at the station. Fourteen African-Americans have gone to space and several have visited the station without staying. Epps was supposed to live there for about six months in 2018.