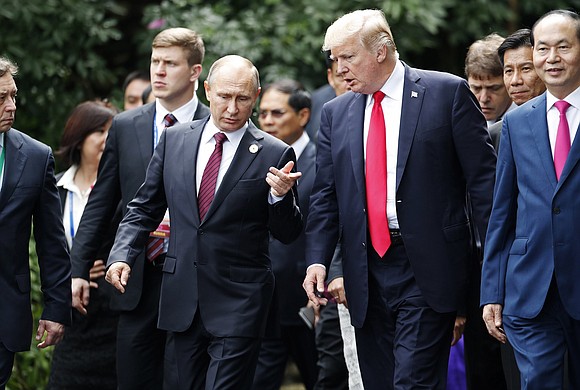 (CNN) -- US President Donald Trump offered Russian President Vladimir Putin assistance in fighting vast wildfires in Siberia during a phone call on Wednesday, the Kremlin said in a statement.

Putin saw the gesture as a step towards warmer relations between both countries, the Kremlin wrote.

"The president of Russia praised this move by the President of the United States as a guarantee that in the future it will be possible to restore full-fledged relations between the two countries," it said.

The phone conversation took place on the "initiative of the American side," the Kremlin added.

The Russian leader expressed his "sincere gratitude" and said he would take Trump up on his offer "if necessary."

Both leaders agreed to keep in contact over the telephone and in face-to-face meetings, the Kremlin wrote.

The call came after Putin ordered Russia's defense ministry to assist in extinguishing the fires.

"There are certain difficulties, but at the same time issues are being resolved with refueling and deployment of airplanes and helicopters," the Kremlin wrote.

The fires, mostly in remote forests, span an area almost the size of Belgium, Reuters reported. Wafting smoke in Siberia had led several regions to declare states of emergency, it added.

Local firefighters told CNN some of the land affected by the fires is difficult to reach. "By the time we get there, they can spread very far," on of the firefighters, Stanislav Zaitsev, told CNN.

Despite criticism from environmental activists, Russian authorities said they would only fight fires that are near populated areas, because putting out the flames elsewhere would not be "economical."

The fires in Siberia are part of more than 100 intense blazes that have ravaged the Arctic since June, with scientists describing the blazes as unusual and "unprecedented."

Exacerbated by rising temperatures, the wildfires also contribute to the climate crisis by releasing carbon dioxide into the atmosphere.