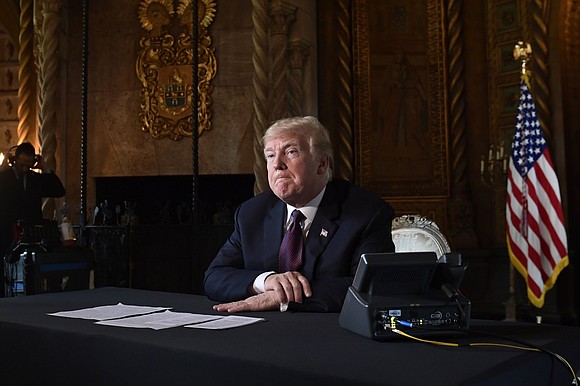 Trump has previously expressed an openness to tougher action on gun control only to back away under pressure from Second Amendment activists and the gun lobby. He did not indicate in his tweets on Monday morning if he supported a sweeping gun control bill that passed the House with bipartisan support in February that requires universal background checks but has not been considered by the Senate.

"Republicans and Democrats must come together and get strong background checks, perhaps marrying this legislation with desperately needed immigration reform," Trump wrote in a pair of tweets, adding, "We must have something good, if not GREAT, come out of these two tragic events!"

Trump also sought to blame the media for the weekend's rampages, saying coverage has "contributed greatly to the anger and rage that has built up over many years," even though the President's rhetoric -- including calling illegal immigration an "infestation" -- has been scrutinized in the wake of the shooting and its potential connection to increased violence against immigrants.

In a televised address later Monday morning, Trump called on the nation to "condemn racism, bigotry and white supremacy" but stopped short of acknowledging his own divisive and racist rhetoric. He did not mention background check legislation or tie any gun action to immigration. He did back so-called "red flag" laws that would prevent access to people who are mentally ill, and he cited video games as a cultural driver behind mass shootings.

In the El Paso shooting, where at least 20 people were killed, the alleged shooter -- identified as Patrick Crusius, of Allen, Texas -- is believed to have authored a four-page document online shortly before the shooting, filled with white supremacist language and racist hatred aimed at immigrants and Latinos and blames immigrants and first-generation Americans for taking away jobs.

The writer cited a fear that an influential Hispanic population in Texas would make the state a "Democratic stronghold." But he says "the Republican Party is also terrible" because the GOP is in his mind pro-corporation, which could lead to more immigration.

The author says he's held these beliefs for years, before Trump became President.

Shortly after the El Paso massacre, a shooter in Dayton, Ohio, opened fire in the city's Oregon District, a popular downtown area, leaving nine dead. The shooter, a 24-year-old male, was shot and killed by responding officers. Police have not released a possible motive behind the attack, and two federal law enforcement sources have told CNN that a preliminary assessment of the shooter's writings did not indicate any racial or political motive.

Trump has long seized on racial tensions for his political gain. Prior to running for president, he pushed "birtherism" -- falsely questioning the birth place of Barack Obama, the nation's first African-American president -- opened his 2016 candidacy by referring to Mexican immigrants as "rapists" and called for banning all Muslims from entering the United States. He was widely criticized for blaming "both sides" in the 2017 Charlottesville, Virginia, white supremacist rally in which one protester was killed and used racist language last month in telling four progressive minority lawmakers to "go back" to the countries of their ancestry, even though all four are US citizens.