Shelley Johnson Inducted into the Destinations International Hall of Fame 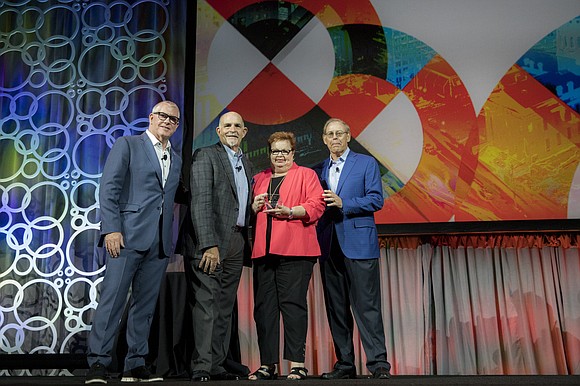 The Hall of Fame, originating in 2014 during Destinations International’s 100th Anniversary, was created to recognize individuals who have changed the future of destination marketing for the better, made significant contributions to the advancement of the industry and shaped travel marketing.

“These individuals have made tremendous contributions for our industry,” said Pate. “This very deserving list has been key to the evolution of our industry and has shaped our industry for future leaders to come.”

“Each Hall of Fame inductee made tremendous contributions to our industry, and we are thrilled to honor them at our Annual Convention in St. Louis,” said Welsh.

“There was a tremendous list of candidates, yet this group continued to rise to the top of our group discussions,” said Steve Moore, President & CEO of Visit Phoenix and Awards Committee Co-Chair. “I am most grateful to the entire committee, the Board of Directors and Destinations International staff for sustaining a platform of inclusive recognition.”

“I’ve been in the industry over 45 years and personally knew most of the early Hall of Fame inductees,” said Paul Arrigo, CDME, President & CEO of Visit Baton Rouge and Awards Committee Co-Chair. “As such I set a high standard for nominees. All of the 2019 recipients are deserving of this honor.”

Shelley Johnson retired earlier this year with more than 30 years as Executive Director/CEO of the Lake Charles/Southwest Louisiana Convention & Visitors Bureau. Johnson’s career had many accomplishments, and the powerful impact that she has had on the tourism industry for Southwest Louisiana, the state, as well as on the national stage is remarkable.

“Whenever I received the news that I was chosen to be inducted into the Destinations International Hall of Fame, it truly took my breath away. I am beyond grateful for the opportunities that I have had over the course of my career and the people that I have had the pleasure of working with along the way. To be recognized by the entire industry is genuinely touching,” said Johnson.

Johnson is the founding chairman of the of the National Scenic Byway Foundation and past board member of the foundation’s national marketing committee. She is a past presidential appointee to the White House Conference on Tourism, and she also received a conservation award by the US Fish & Wildlife Service, Southeast Region.

She became the executive director of the CVB in 1988 and oversaw a second office for the CVB, Creole Nature Trail Adventure Point, starting in 2015. During that time, the CVB was well-recognized with accolades such as the CVB of the Year in 1997, 2000, and 2015 by Southeast Tourism Society, covering 11 southern states. The bureau also received CVB of the Year by the Louisiana Travel Association in 2008 and 2012. In 2018, Shelley received the Lifetime Achievement Award by the Louisiana Travel Association and The Beacon Award by the Southeast Tourism Society.

Perhaps one of Johnson’s greatest achievements centered on the great outdoors with her promotion and nurturing of the Creole Nature Trail that was officially designated in 1975. The Creole Nature Trail roadway was named as a state scenic byway in 1993 with members of the CVB and the Cameron Parish Tourist Commission. In 1996, the district worked to receive recognition of the trail as a federal byway, and then later, as an All-American Road in 2002. The Creole Nature Trail received many marketing grants, has a strong and distinctive brand, and it has been written about by travel media for decades.

Johnson grew the CVB from a small bureau with only a staff of 4 and a budget of $150,000 to the current staff that exceeds 25 full and part-time employees. She dedicated her entire life to tourism and encouraging others to achieve nothing short of excellence. She is revered throughout the tourism industry as someone who can get things done efficiently and effectively, always with hospitality at the core of everything that she does and going above and beyond to make the industry shine.

For more information about the Hall of Fame, visit www.destinationsinternational.org.