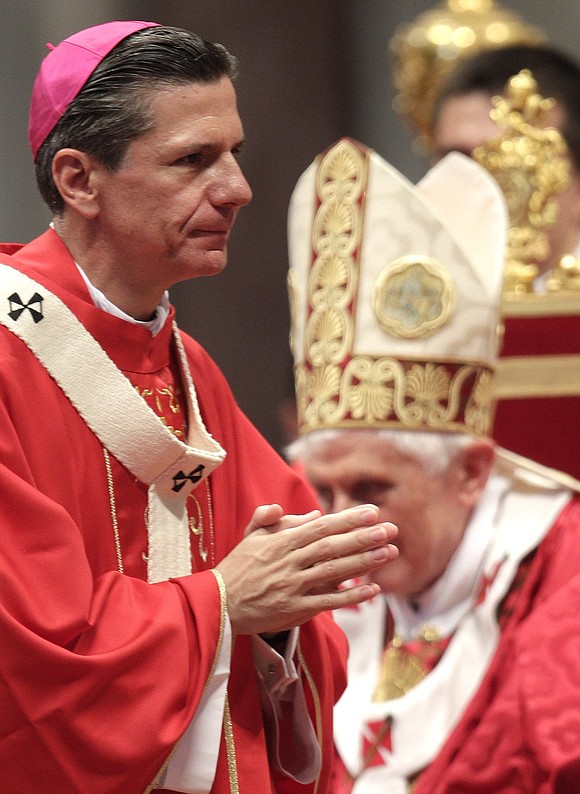 Gustavo Garcia-Siller, Archbishop of San Antonio, at the Vatican in 2011. The church leader has become likely the first Catholic bishop in the United States to publicly accuse Trump of racism.

(CNN) -- In recent years a number of Catholic bishops have denounced President Donald Trump's immigration policies and harsh rhetoric toward immigrants and people of color.

But one church leader went one step further, becoming likely the first Catholic bishop in the United States to publicly accuse Trump of racism.

In a series of lacerating tweets, Archbishop Gustavo Garcia-Siller of San Antonio, Texas, called the President "a very poor man" and urged him to "stop hate and racism, starting with yourself."

On Tuesday, Garcia-Siller deleted the tweets and said in a statement: "I regret that my recent Tweet remarks were not focused on the issues but on an individual."

"We must pray for fervently for peace amidst all of the violence which seems to be overwhelming our society. We must be lights in the darkness," the archbishop added.

Garcia-Siller's tweets were reacting to the massacre of 22 people at a Walmart in El Paso, Texas, on Saturday. The accused gunman is believed to have authored a racist, anti-immigrant document that laid out a dark vision of America overrun by Latinos.

Some of the language in the manifesto reflects ideas from President Trump, Fox News and the modern Republican party. For example, the document warns of a "Hispanic invasion" and says Democrats are using "open borders" and "free healthcare for illegals" to attract new voters.

On Monday, Trump called on the nation to condemn racism and white supremacy, but didn't address his own role in stoking fears of immigrants, who he frequently refers to as "invaders."

"The shooter in El Paso posted a manifesto online, consumed by racist hate," Trump said in remarks from the White House. "In one voice, our nation must condemn racism, bigotry and white supremacy. These sinister ideologies must be defeated. Hate has no place in America. Hatred warps the mind, ravages the heart and devours the soul."

A number of progressive pastors and bishops in the United States have already denounced the President's actions and rhetoric, particularly on Twitter. And last week, leaders of the Washington National Cathedral slammed Trump's attacks on minority lawmakers and the city of Baltimore as a "dangerous" rallying cry to white supremacist violence.

But Garcia-Siller's tweets were different, for two reasons: First, he represents the country's largest religious group, Catholics, who have about 71 million members in the United States. And secondly, Garcia-Siller is not known as a liberal, so his accusation may have been less easily dismissed than those by Trump critics on the left.

Garcia-Siller was born in Mexico and became a US citizen in 1998, according to his official biography.

Other Catholic leaders in the United States reacted with dismay to Saturday's shooting, as well as to another shooting early Sunday in Dayton, Ohio, that killed 9 people.

"As details emerged about these latest mass shootings, many of us asked a simple, anguished question -- how long must we wait?" said Cardinal Joe Tobin of Newark, New Jersey.

"What is different now is the culture of hate that has been developing over the last few years," Tobin continued. "Whether it is expressed in the violence of white nationalism or violence against the defenseless unborn, hate seems to be an accepted way of life."