Puerto Rican artist Ignacio Peña wraps up 2019 and the decade with a big bang! 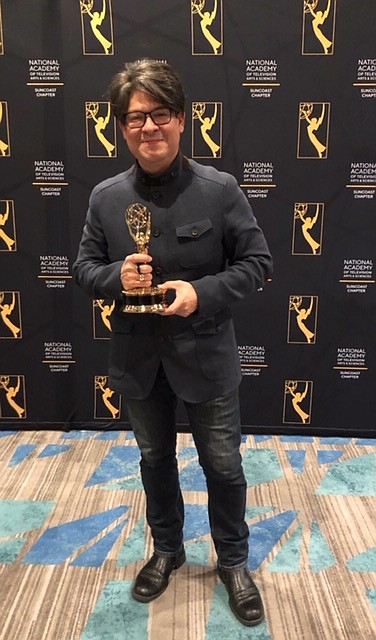 Puerto Rican musician, composer, and audiovisual producer Ignacio Peña, twice winner of the Emmy Award, wraps up 2019 and the decade, with a big bang by winning his third Suncoast Emmy Award given by the National Academy of Television Arts & Sciences (NATAS) at its 43rd annual edition, held on Saturday, December 15. His production Ignacio Peña la Historia de Anormal (Ignacio Peña the Story of Abnormal) was the winner in the Best Documentary category.

The Suncoast Emmy is the regional edition of this award, presented by the National Academy of Television Arts & Sciences to producers in the southern United States, in the states of Florida, Louisiana, Alabama, Georgia, and also Puerto Rico.

Ignacio Peña la Historia de Anormalis a look at the rock and pop path that this musical genius has traveled, in a continent like Latin America, where popular and tropical music traditionally tend to overshadow everything else. Peña has put himself out there in the name of music that he considers has an underdog status right now.

A multimedia creator, musician, composer, and audiovisual producer, Peña is known for giving his richly complex artistic endeavors a unique stamp. He has a degree in music production and engineering from the Berklee College of Music of Boston.

Previously, between 2015 and 2017, he was nominated for five Emmy awards from the NATAS Suncoast Chapter, from which he won two awards for the WIPR-TV short documentaries Por Qué Conmemoramos and Soy De Una Raza Pura.

Currently, after the release of three albums, Ignacio Peña is promoting his new single "Can It Wait?" from his album Songs for the Fall of an Empire (2020). This new song talks about how violence and war are manipulated from the shadows by faceless powers that only seek to profit from human pain and misery.